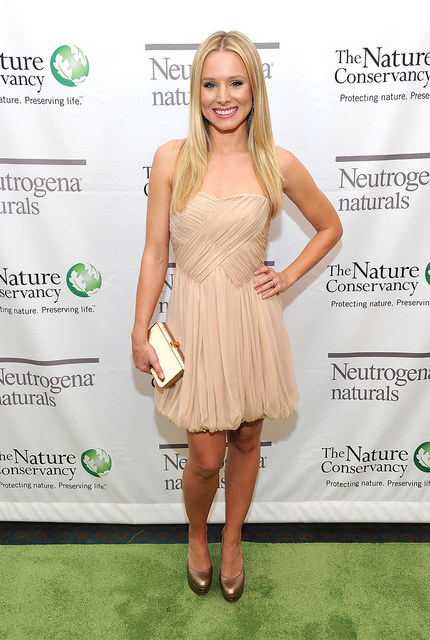 Are you aware that your five-minute morning shower uses more water than the average person in a developing country uses for an entire day? Did you know that 780 million people lack access to clean water? That’s more than 2.5 times the United States population. If those stats didn’t make you want to re-think your water consumption, try this. The average U.S. household wastes about 10,000 gallons of water every year.

Actress, environmental advocate, Kristen Bell is partnering with Neutrogena Naturals for the “Jump in, Jump out, Join in” campaign, which encourages people to help save one million gallons of water by adopting easy, water-conserving behaviors. (Eco Chick is working on featuring Kristen in our “Heroines for the Planet” series.)

Getting involved is super simple. Visit the Neutrogena Facebook page and pledge to adopt simple water-conserving behaviors in your daily routine. Not only will you be an environmental steward, but those who take their “shower pledge” will have a chance to win some of  Kristen’s personal eco faves, from beach cruisers and self-filtering water bottles to eco-sacks and Neutrogena Naturals skincare. One lucky winner will receive an all-expenses paid trip for two to Los Angeles to meet the actress in person and take a tour of her top eco spots.

Throughout the month of October, Neutrogena Naturals will be donating 10 percent of the purchase price of their Purifying Facial Cleanser — up to a maximum of $50,000 — to The Nature Conservancy to support their water conservation efforts.

Farm (to Skin) to Table! The Best Spring Salads

Friendships (and Breakups) are Vital to Happiness, Here’s Why