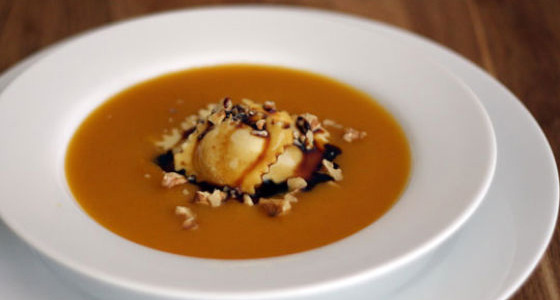 That’s right, I said these three soup recipes are amazing. And they’re vegetarian, no less. Maybe it’s not often that such a strong adjective is used in connection with light brothy concoctions that generally serve as an unremarkable precursor to a more satisfying meal. But have you ever had butternut squash soup with ravioli, quinoa soup with red chili pepper, or cream of roasted red pepper soup with basil-spinach puree? Okay then.

And while you’re at it, check out last year’s 3 super-satisfying soup recipes, which include garlic, chickpea and spinach soup, fat-free vegan red lentil curry soup and ginger gold apple and squash soup.

Butternut Squash Soup with Ravioli
(image above and recipe via: foodie bride)

Foodie Bride calls this recipe, adapted from Better Homes and Gardens, an “impulse soup”. I call it the most delicious squash-related meal I’ve ever had. Roasted butternut squash is surprisingly rich and creamy, and when paired with cheese ravioli, it’s filling as well. Not a fan of butternut squash? Try making some classic carrot soup with ginger and orange and adding some ravioli for a spicy variation.

“Heat the oil in a saucepan and cook the garlic and onions until soft and golden. Stir in the cumin and coriander and cook for one minute. Add the stock and potatoes. Bring to a boil and simmer for 10 minutes.

Add chickpeas and simmer for another 5 minutes or until potatoes are tender. Mix the cornflour, cream and tahini together. Stir into the soup with the spinach. Season with salt and pepper to taste. Bring to the boil, stirring and simmering for another 2 minutes. Sprinkle with cayenne pepper before serving.”

Quinoa is a superfood unlike any other, especially for vegetarians and those with gluten sensitivities, because it satisfies the craving for grains but is also packed with vitamins, minerals and plenty of protein. Vegetarian cook Emmie Kjellberg of Veg Bitch notes that it’s easy and cheap, and you can increase the heat on cold days by adding extra chili pepper.

“Add quinoa and water together and bring to a boil. Simmer for 5 minutes and in the meantime prepare your vegetables. Peel and chop onion and garlic. Cut leek in half lenghtwise and rinse it. Chop up. Peel and julienne the carrot. (If using bell pepper cut it into small pieces). When the quinoa has simmered for 5 minutes drain it. Pour oil into a large soup pot and add the vegetables and garlic (if using spinach in the soup, don’t add it yet). Sauté for a few minutes and then add finely chopped red chili, saute for another minute. Add quinoa, the can of crushed tomatoes, vegetable stock and let the soup simmer for about 20 minutes, until the quinoa is soft and has started opening. (If using spinach add this in just a few minutes before taking the soup of the hob and if using beans add them in 5 mins before taking it off, just enough to get them hot). Add salt and pepper to taste.

Add the garnish ingredients to a small bowl and sprinkle over the soup before you eat it.”

It’s creamy, sweet and spicy with a rich depth of flavor and a heft that only potatoes can provide – and it’s vegan. In just over 40 minutes, with very little effort, you’ll have a stunning pale red soup topped with a vibrant green dollop of spinach-basil puree that will make you want to break out your camera and brag about your cooking skills on Facebook.

In a large pot, saute the potato, red onion, and celery in olive oil for 10 minutes or until lightly browned and soft. Add the garlic, chili powder, paprika, salt, and white pepper, and saute an additional 2 minutes. Sprinkle the flour over the top of the vegetables, stir well, and cook an additional 1 minute. Remove the pot from the heat.

Transfer the roasted red peppers and sauteed vegetables to a food processor. Add 1 cup vegetable stock and puree until smooth. Transfer the puree back to the large pot, add the remaining vegetable stock and sherry, and simmer over low heat until heated through. Stir in the soy milk, taste, and adjust the seasonings as needed. Garnish individual servings with a drizzle of the Basil-Spinach Puree for added color and flavor.”

What Are Your Consumer Consequences?

BULA: Gifts That Create A School for Ugandan Kids