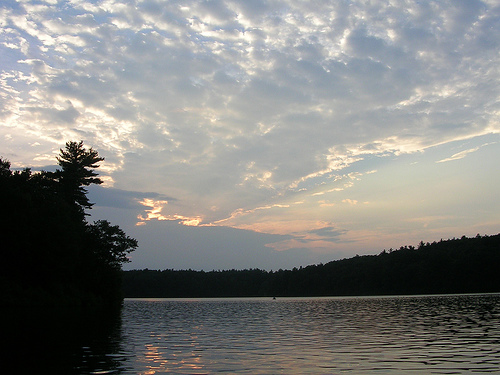 I was swimming today at Walden, the pristine pond in Concord, Massachusetts that inspired Henry David Thoreau, when another New England nature writer, Pulitzer Prize winning poet, Mary Oliver, came to mind. When I was younger and spent more time at the pond, I liked to memorize and recite some of Oliver’s stuff while I walked the trails around it. By now I have mostly forgotten all the poems I once knew, but as I floated on my back and checked out the clouds over Walden for the first time in years, the words of Oliver’s Going to Walden drifted through my mind:

It isn’t very far as highways lie.
I might be back by night fall, having seen
The rough pines, and the stones, and the clear water.
Friends argue that I might be wiser for it.
They do not hear that far-off Yankee whisper:
How dull we grow from hurrying here and there!

Many have gone, and think me half a fool
To miss a day in the cool country.
Maybe. But in a book I read and cherish,
Going to Walden is not so easy a thing
As a green visit. It is the slow and difficult
Trick of living, and finding it where you are.

I only sort of agree with the point Oliver makes in the poem, and it seems I’m not alone. One of the great things about Walden is how many people do go there, mostly as a getaway from Boston. (You can’t tell from the photo, which I took as the park was closing, but there were hundreds of people there today, as there are on most summer weekends.) These days it seems like everyone is carving out his or her own private plot on the side of a mountain or at the shore, so it gives me a good feeling to know that there are still some beautiful places that anyone can enjoy.

The state and the Walden Woods Project are good stewards and, despite all the visitors, it isn’t trashed. Something makes me think that Thoreau, who was never as hardcore about the woods as most people like to imagine, would have enjoyed hanging out at Walden Pond today.

Under The Canopy Organic Bedding Giveaway

Melissa Shoes "Shop Within a Shop" at Kaight in NYC