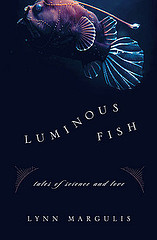 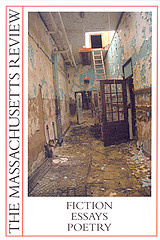 This afternoon I managed to catch MR2, the radio show of the Massachusetts Review, broadcast from WMUA at the University of Massachusetts-Amherst. The guest was Dr. Lynn Margulis, there to talk about her latest book, Luminous Fish, just released from Vermont-based independent press Chelsea Green.

Margulis is best known for her theory of endosymbiosis and her contributions to the Gaia hypothesis. Margulis is also known, however, for criticizing the scientific community and the culture at large for accepting the narrowness of anthropocentrism, sloppiness in the popular press, and crookedness in the medical establishment. Her voice is refreshing at a time when many scientists are too specialized and fearful that they’ll lose their funding for their work to be as influential or relevant as it might otherwise be.

Lambasting the medical establishment, Margulis said today, “I think medical science is as big a contradiction as military intelligence.”

During an interview last October during the Bioneers by the Bay conference, she said, “To think that there is something special or chosen about people is part of the human delusion. Without human delusion we wouldn’t have six thousand million people on Earth and only 10,000 chimps…We expand by bringing our habitat to places it shouldn’t be, it never was.”

For anyone in the New England area, Dr. Margulis will be reading from Luminous Fish tomorrow night (Feb 20) in Memorial Hall at the University of Massachusetts-Amherst starting at 7PM.