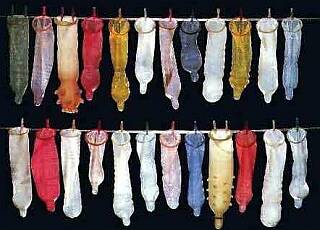 This week I’ve been pillaging sex readings and topics for one of my cultural geography classes. One of the most interesting topics I’ve come across in my eco-sexual readings is the topic of condoms. Having had not so friendly experiences with the pill I switched to condom exclusive relations but I’ve found that going down the condom road gets a little bit ethically bumpy, even though they are deemed by many to be the best eco-choice.

But in general we can come to the conclusion that the condom has in one sense or another been a great contributor in preventing an even more dire ecological catastrophe. There are a few things that are adding greatly to environmental degradation right now – pollution being a pretty big one and over consumption. Individually none of us are doing too much harm. I’ve gotten into an argument or two with various people about the effectiveness of “living the movement”. Their argument being a very good one – you as an individual living the movement has no impact what so ever. (But leading by example has a pretty big one.) The problem is… there are 6 billion of us. And billions of us drive cars and over consume. Billions of us contribute to the process of deforestation. Not just us individually.

Malthus told us all that eventually our resources are going to vanish, and we’re going to kill each other off due to competition. We’ve found different ways of getting around this happening. We create machines to keep people alive, manufacture foods and chemicals, keep finding ways to make energy and basically use the Earth to death. Why do we need to do this? Because we keep popping out children. The simple and effective form of birth control – the condom has given our species a way of controlling population, and thus needing fewer resources. The condom is a staple of a social achievement, it’s a conscious attempt to slow down and take control of our population.

But please… remember not to flush your condoms.

Flushing condoms is a huge no-go, more so than flushing tampons. It will clog pipes and treatment plants – not to mention that flushed water often runs out eventually into the environment.

Wikipedia tells us that (latex is biodegradable and…) an estimated 61 million to 100 million condoms are disposed of improperly in Britain alone, and as we can see from the durex survey at the beginning Brits aren’t even the ones having the most sex. The condoms end up covering coral reefs and sea grasses.

Part of what I’ve found in my readings about latex is that if they are biodegradable, they’re not going to biodegradable at all underwater. Regrettably it looks like the best option is to simply send the to the landfill. Female condoms are made of polyurethane, so I recommend sticking to the male condoms if you’re in a hetero-relationship and are considering female condoms as an alternative. By biggest recommendation is that if you’re into monogamy get yourself and your partner tested and then you’ll be in the clear for sheep skin condoms. But although the sheep skin condom is biodegradable, don’t go throwing it into the composter – animals love that scent you know.

Although latex condoms may or may not be recyclable, sheepskin may not protect against STDs and they’re all around not perfect they are an incredibly important part of healthy societies. Not only do I recommend you check out vegan options for condoms or take a look at condoms at environmentally friendly stores – but just use them in general and support the spread of their use in underdeveloped and developing countries.

(As a short end note, I would like to point out that I am aware of the religious controversies around condoms. But I’m not going to touch it with a 10 foot pole. I don’t agree with the religious side of the controversy, but I really want to focus on the positive outcomes that safe sex and sex eduction have given us.)

hessnatur; organic is the new modern