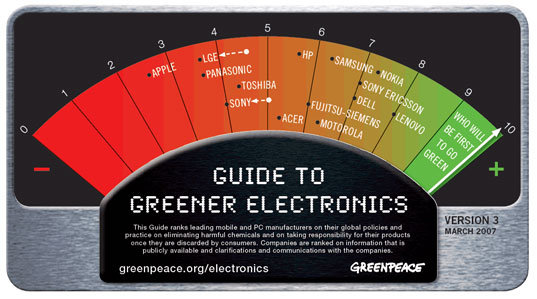 · Some brominated flame retardants, used in circuit boards and plastic casings, do not break down easily and build up in the environment. Long-term exposure can lead to impaired learning and memory functions. They can also interfere with thyroid and oestrogen hormone systems and exposure in the womb has been linked to behavioural problems.

· As much as 1000 tonnes of a brominated flame retardant called TBBPA was used to manufacture 674 million mobile phones in 2004. This chemical has been linked to neurotoxicity.

· The cathode ray tubes (CTR) in monitors sold worldwide in 2002 contain approximately 10,000 tonnes of lead. Exposure to lead can cause intellectual impairment in children and can damage the nervous, blood and reproductive systems in adults.

· Cadmium, used in rechargeable computer batteries, contacts and switches and in older CRTs, can bioaccumulate in the environment and is highly toxic, primarily affecting the kidneys and bones.

· Compounds of hexavalent chromium, used in the production of metal housings, are highly toxic and human carcinogens.

· Polyvinyl chloride (PVC) is a chlorinated plastic used in some electronics products and for insulation on wires and cables. Chlorinated dioxins and furans are released when PVC is produced or disposed of by incineration (or simply burning). These chemicals are highly persistent in the environment and many are toxic even in very low concentrations.

Greenpeace has an extremely informative section on their website about electronics. Recently they have released their third discussion and break down on where companies stack up in regards to being green. I always knew there was another better reason as to why I haven’t liked using macs…

For the Apple-Loving skeptics who demand to know more greenpeace accompanies each accusation with a PDF break down of why they have placed the companies in the respective areas.

Apple for example gets the following information tacked to it

Apple isn’t the only mega company appearing in the “Hall of Shame“. IBM, Toshiba, Panasonic and Acer all make an appearance as well.

Not all hope is lost, Greenpeace also offers resources and guidelines to buying green electronics. And if all this worrying and fretting starts to get you a little worked up, have no fear, you can always go see an Eco-Therapist.

Electric Cars ARE for Girls!

Win a Zipcar Membership for a Year + 250 Hours of Driving Time!