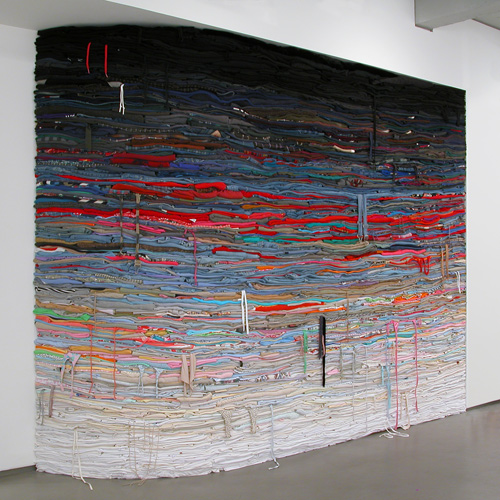 Artist Derick Melander creates large geometric structures from carefully folded and stacked second-hand clothing that weighs between five hundred pounds and two tons. What seems like a straightforward process – procuring the clothing, sorting it by colour value, folding and stacking it – soon takes on a life of its own. Thousands of once loved and lived in pieces of clothing can’t be discarded that easily.

Look at the images below, for example, showing the 2008-installation “The Ocean is the Underlying Basis for Every Wave,” an “S”-shaped wall of folded and stacked clothing sorted by colour. A total of 2,908 garments were used, weighing 1,859 lb.

Why second-hand clothing items? Says Melander: “As clothing wears, fades, stains and stretches it becomes an intimate record of our physical presence. It traces the edge of the body, defining the boundary between the individual and the outside world. … When I come across a dress with a hand-sewn repair, or a coat with a name written inside the collar, the work starts to feel like a collective portrait.” 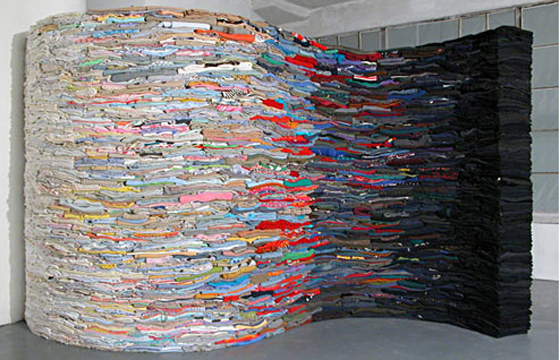 “The Ocean is the Underlying Basis for Every Wave” (2008)

Clothing as an individual project yet collective statement? Kind of like “you are what you wear” meets “the personal is political.” Fact is that while working on the pieces, the thoughts that go through Melander’s and his volunteers’ minds invariably focus on the “who.” Who has worn this clothing? And what was this person’s story? As it becomes obvious that the clothing has been handled and lived in, it transforms from an object to a piece of living history. 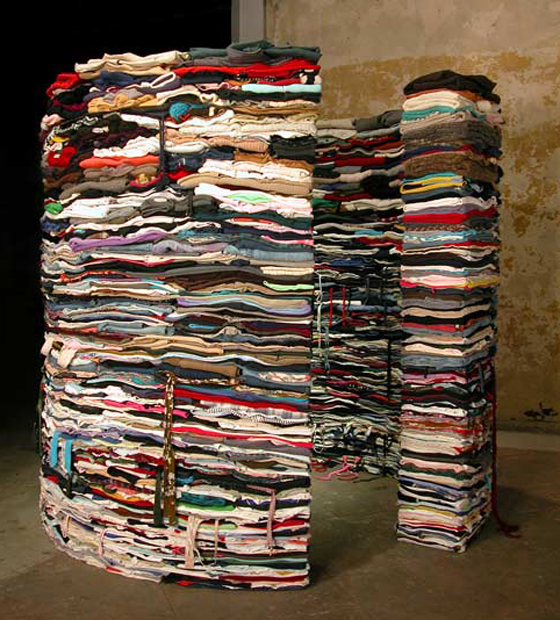 Melander wants us, the viewers or visitors, to interact with his sculptures and reflect on the bigger pictures. Take his 2005-installation “Grasp” above. Like a doorway, the 6-ft-tall structure invites visitors to take a peak at what’s inside. What visitors don’t realize is that they have to brush against the garments while entering the shoulder-wide doorway, thus “completing a circuit with the rest of the clothing.” 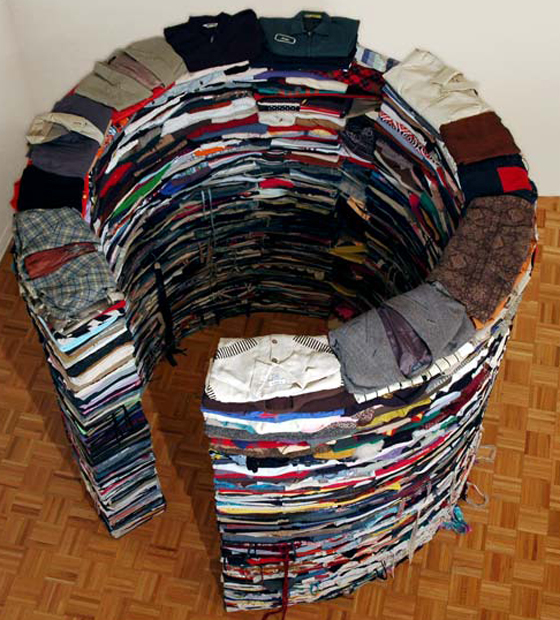 It’s easy to see how clothing, our protective, and decorative, layer against the outside world, very quickly takes on a deeper meaning, kind of like the discarded skins of a person. Says Melander about this transformation: “As the layers of clothing accumulate, the individual garments are compressed into a single mass, a symbolic gesture that explores the conflicted space between society and the individual, between the self and the outside world.” 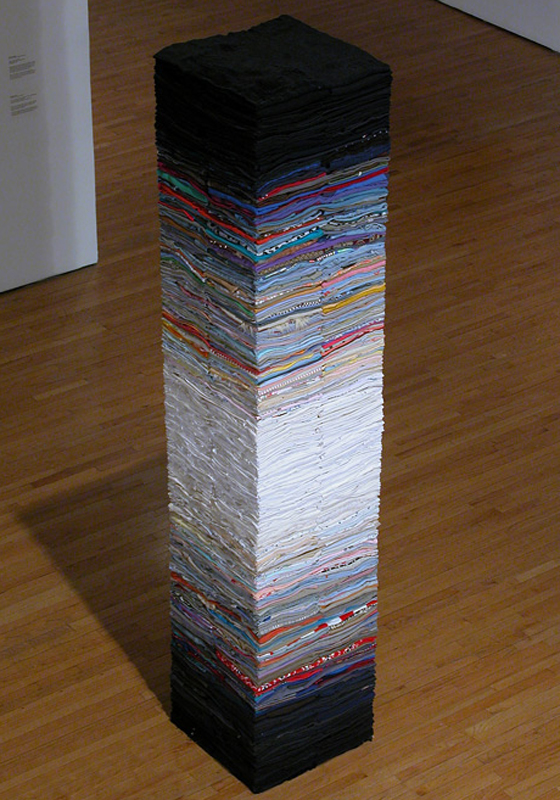 Some of Melander’s art works raise important environmental questions. On September 24th, 2009, Melander together with many volunteers created the 5 x 7 ft sculpture “Into The Fold” from 3,615 pounds of folded second-hand clothing. It was done in front of Brooklyn Borough Hall as part of the 5th Annual “Green Brooklyn…Green City” Fair and Symposium. The event was hosted by the Office of Recycling Outreach and Education and all clothing was loaned by textile recycling company Wearable Collections. Why exactly 3,615 lb of clothing? That’s the amount of textile waste created by New Yorkers every 5 minutes, a truly mind boggling figure!

Here’s the video of the making of this monumental textile sculpture:

Into The Fold, Brooklyn Borough Hall from Derick Melander on Vimeo.

New York-based Melander, son of an abstract painter, has many interests that have shaped his artistic path. He received an associate degree in communications from Elizabeth Seton College in Yonkers, NY in 1985 where he studied music programming, film making, acting and graphic design. After working as an assistant to artist Jerry Goodman, singing in two bands and teaching nursery school, Melander got his first own art studio and a BFA from NYC’s School of Visual Arts in 1994. He has a second career as an information architect and is the organiser and curator of many art exhibitions.

Melander’s artworks, simple as they may seem at first glance, soon reveal the larger context that makes us ponder over questions of identity and image, but also the garment and fashion industry and how many different pieces of clothing each of us really needs. And those old clothes chucked out while doing the spring cleaning? Well, we got some ideas for those. 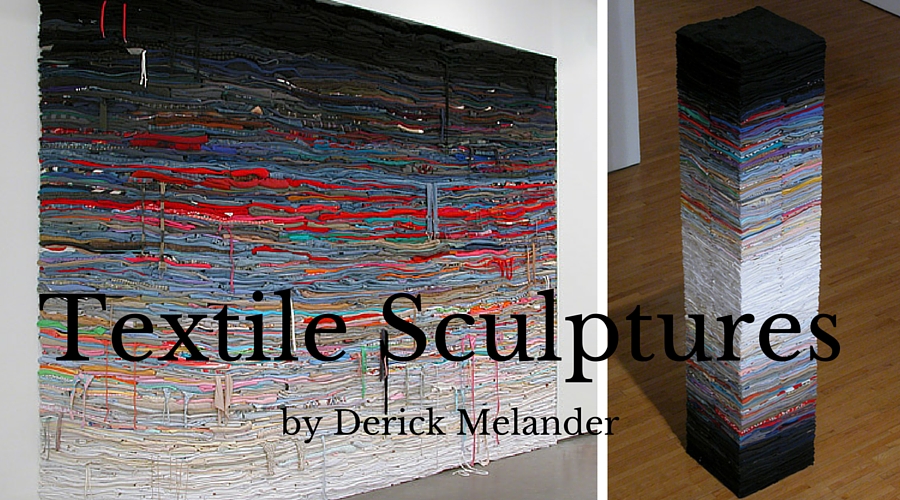 Style Swaps! A Treehugger/Birdwatcher Exchanges Looks with a Corporate Lady