Project Green Search, the first-ever green model competition, has a winner! Rachel Avalon hails from Los Angeles, California, and beat out over 130 other serious contenders for her new title as Green It Girl (read more about Rachel and her plans here). But before the winner was chosen, there were activities, photo shoots and some very good times. 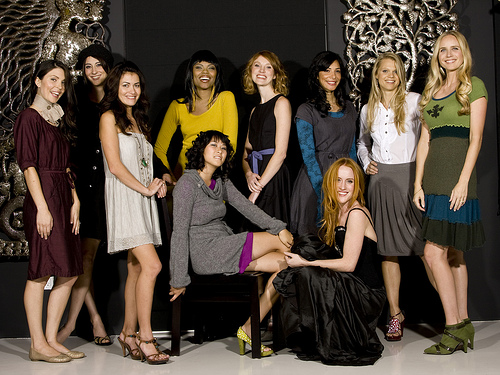 The Ten Gorgeous (and Green to the Core!) Finalists Photo by Courtney Dailey.

Judging Project Green Search was lots of fun; I got a chance to go to most of the activities with the finalists and got to know them; what an impressive group of young women! From an Indy racecar driver to a natural nutritional counselor, to a college activist and an environmental educator, this was a talented and driven group of contenders. And as you can see, all of them were gorgeous too! The judging crew and I (see below) had our work cut out for us.

Day One: I got a chance to meet all the girls at a breakfast at our hotel, The Standard on Sunset Boulevard. Everyone was so excited to be there, and Taryn from EcoDivasTV started filming right away, and off we went! 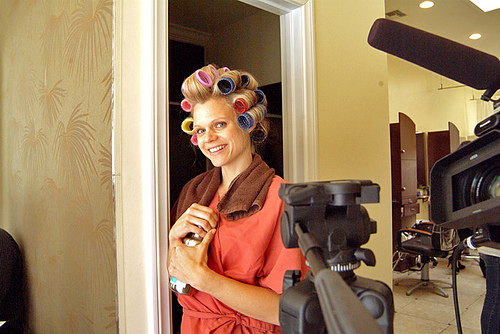 Vanessa Meier even looks gorgeous in curlers! At Shades salon in LA. Image by Remy Chevalier for Lu Magazine.

After the girls (and I, luckily enough) got our hair done at Shades Salon in Los Angeles (with nontoxic, natural hair color created by the owner of the salon herself!), we headed over to Environment Furniture, where the contestants changed into beautiful ecofashion outfits provided by Stewart + Brown, Mountains of the Moon, EcoSkin and Deborah Lindquist. Then it was time for pictures! After getting their shots done, I interviewed the hopefuls; this competition was about a lot more than just looks, after all. 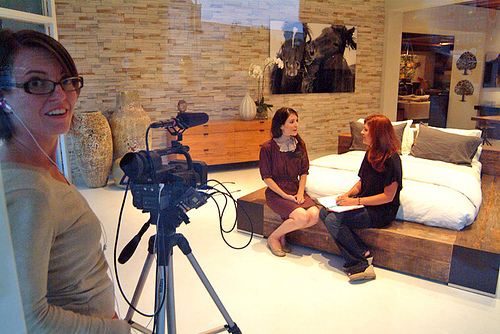 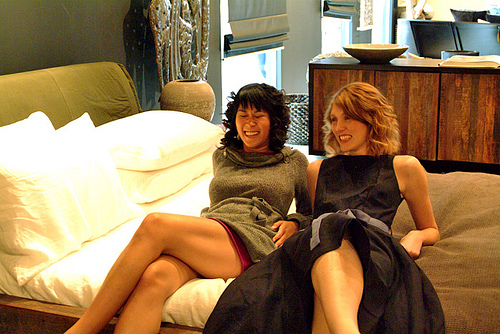 Juliana Tran (in Stewart + Brown cashmere dress) and Vanessa Meier (in Mountains of the Moon hemp dress) relax after their photo shoot with Courtney Dailey. Image by Remy Chevalier for Lu Magazine.

During the 7-hour photo shoot at Environment Furniture, the contestants got a chance to know eachother; networking and building community was a big part of what PGS is all about. All of our top ten finalists displayed their dedication to the environment (and class) by keeping all traces of cattiness out of the competition and really bonded. Very cool. 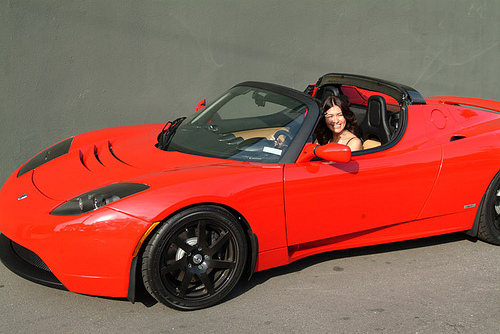 Leilani Munter, an Indy racecar driver and PGS finalist, was right at home in an all-electric Tesla sports coupe. Image by Remy Chevalier for Lu Magazine. 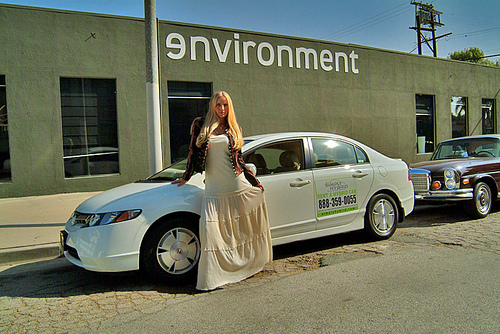 That night the girls did some guerilla gardening, planting trees in an abandoned lot. In stilettos no less! It made quite the photo shoot, echoing Vogue’s recent coverage on the subject. Then we all retired to the House of Blues for some relaxation and chill-time. 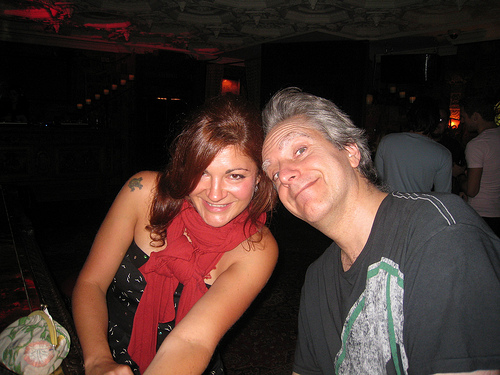 Day Two: After I sat on the Ecostiletto-organized green bloggers panel, the PGS contestants model sustainable style in a vegan fashion show at the same event. 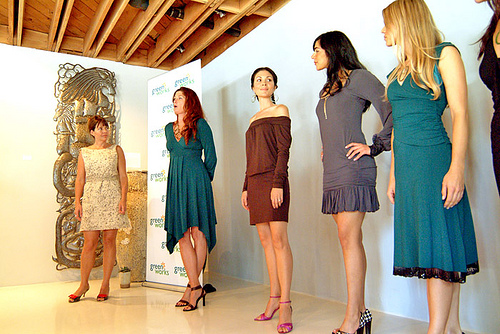 After the fashion show (where I was totally distracted by the gorgeous clothes, but fellow judge and ecofashion designer Deborah Lindquist made notes about how each girl worked it on the runway), we all had a bit of time to relax before the big party (and reveal) later on. 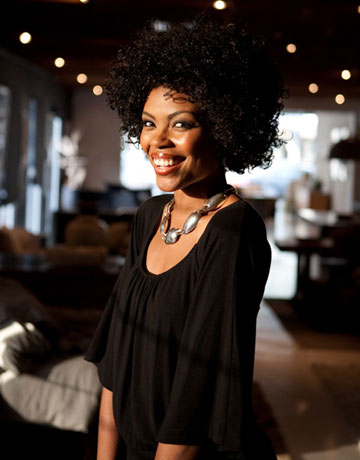 I was nervous about figuring out who were my top choices, but in the end I narrowed it down to four girls who I thought would make the best representative to be the new green ‘It’ model. 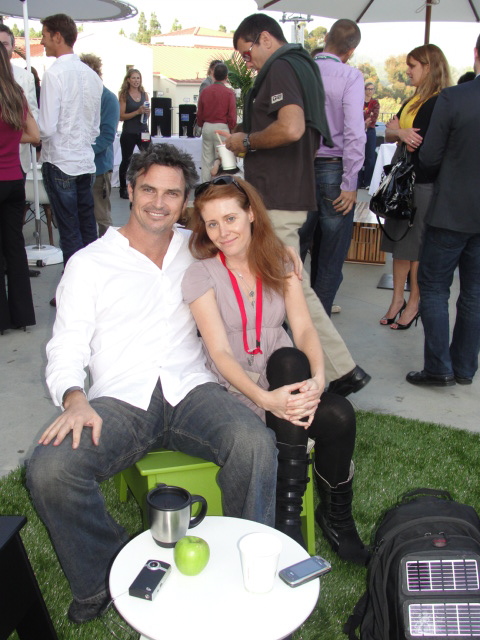 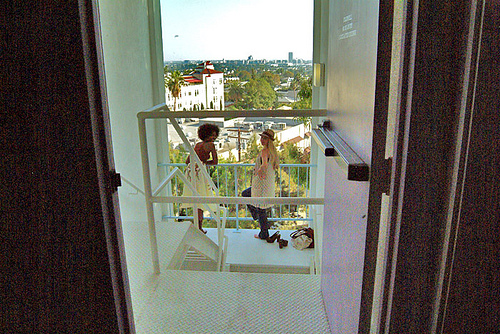 Zion Francis and Ariel Clay relax at The Standard before the Big Night! Photo by Remy Chevalier for Lu Magazine.

Upon arrival at ECCO ultralounge, each contestant got one final chance to make her case, telling the crowd who she was and why she was the right woman for the PGS job. Supporters and family members cheered on their favorites which made it all really fun. Then the other judges and I went upstairs to deliberate among ourselves and make our final decision! 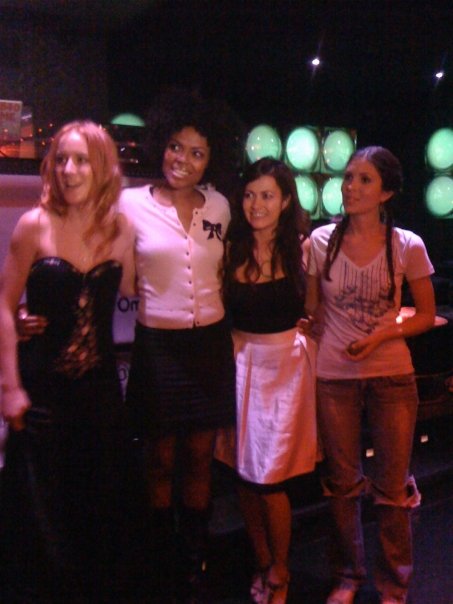 Jessica Williamson, Zion Francis, Leilani Munter and Rachel Avalon, waiting to see who will be announced the winner of PGS.

MC and judge Darren Moore played the reveal reality-show style, eliminating contestants and building suspense until there were just four ladies left. It was pretty painful to stand there and watch, I must admit! And then, Rachel Avalon was named the winner of Project Green Search! Congratulations Rachel, and to all the other contestants, thank you for making the first PGS an amazing, inspiring event!

And there are plenty of more great image from PGS on The Daily Green’s fun flipbook.

The Art of Dumpster Diving