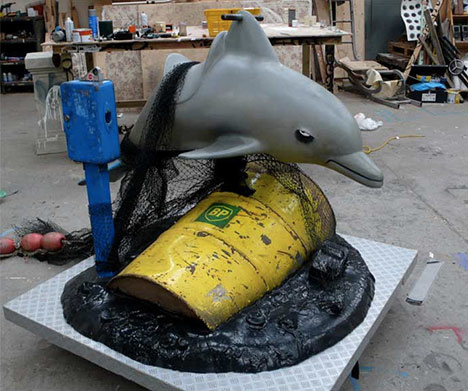 Because the Gulf Oil spill could have been prevented if government agencies did what they are supposed to do instead of kowtowing to corporate interests.

Because we think we can control nature, and we cannot, and our hubris results in disaster.

Because we will never know how many marine mammals were affected by the spill (the area is so large, and so diverse, it’s impossible to do anything but guesstimate).

Because there are other living things that share our planet with us, and they don’t hunt, maim, eat (for amusement, not need), and spill oil over humans. But we do, without apology.

Because the people that make money from pumping oil from under the Earth should have their mouths washed out with oil, should have to bathe in the stuff for at least a month, should be at least held accountable (losing one’s job is not enough; plenty of folks have lost theirs in recent years for no good reason at all).

Because this whole debacle made me ashamed to be human- again. Because it didn’t need to happen and only did because some people care more about money than anything else, and I’m still not sure why we reward those of us that consistently show humanity’s worst traits instead of our best ones (and we have great ones too!).

Because we can do better, but choose not to.

Because maybe art is the only way to say these things, to express this anger, to shame the seemingly unshameable.