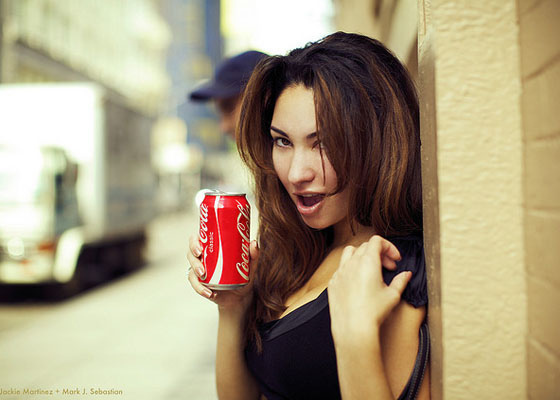 Drinking soda is often sexualized and sexified, like in this image. But it’s one of the worst substances you can consume on a regular basis. Image via Mark Sebastian on Flickr.

Most of us know that soda is a not-great treat, one that most nutritionists advise us against. But how many women do you know with an admitted “Diet Coke addiction”? Well, it may be way worse than just an attachment to a bubbly beverage.

According to the trustworthy Rodale.com, it looks like unbeknownst to most of us (soda company honchos insist that it’s totally fine to consume it, of course), soda – especially colas like Coke and Pepsi – contain a cancer causing element.

High levels of a carcinogen known as 4-methylimidazole, or 4-MI, are created when certain forms of ammonia are used to create the caramel food dye used in some of the most popular soda brands on the planet. Although CSPI is lobbying the Food and Drug Administration to change label requirements, for now, it’s perfectly legal for soda to harbor hidden carcinogens without any disclosure on the label.

The Food and Drug Administration says the chemical is still safe despite the fact that CSPI projects common levels of 4-MI found in Coke and Pepsi cause 15,000 cancers a year. Part of the problem? Chemicals are introduced into the food system before being adequately tested for long-term effects in humans. “It’s hard to know how serious a problem food dyes might pose to health because the science is so difficult to do,” says Marion Nestle, PhD, professor of nutrition, food studies, and public health at New York University.

Want more reasons to stay away from the carbonated stuff? It has negative health effects whether you’re over- or underweight, or whether you drink diet soda or the sugary stuff. According to The Stir’s piece entitled “Drinking Soda is Now Just as Bad for You as Smoking” (haha!), “Researchers at the University of Oklahoma Health Sciences Center have found that drinking two or more sugary drinks a day dramatically raises women’s risk for diabetes and high cholesterol. And while women who regularly quaff sugary beverages, like soda, are also much more likely to become obese, even skinny female soda drinkers had a higher risk for heart disease and diabetes.”

Diet soda is just as bad for your health, just in different ways. While it too has been linked to an “…increased risk for stroke and heart disease,” even more disturbing is how artificial sweeteners in soda affect the body in strange ways. According to Rodale’s excellent piece, “9 Disturbing Side Effects of Soda”:

“Researchers from the University of Texas Health Science Center monitored 475 adults for 10 years, and found that those who drank diet soda had a 70 percent increase in waist circumference over the 10-year study, compared with those who didn’t drink any soda. Those who drank more than two diet sodas per day saw a 500 percent waist expansion! A separate study the same researchers conducted on mice suggested that it was the aspartame, which raised blood glucose levels, that caused the weight gain; when your liver encounters too much glucose, the excess is converted to body fat.”

I enjoy a good root beer – with vanilla ice cream – about once year, and in the summer I love a gin and tonic, but that’s about it for my soda consumption. I usually opt for tapwater with lemon or herbal tea at restaurants. At home I drink Emergen-C in my water, make tea (cold chamomile and green teas) and fresh-squeezed juice.

What do you drink instead of soda?