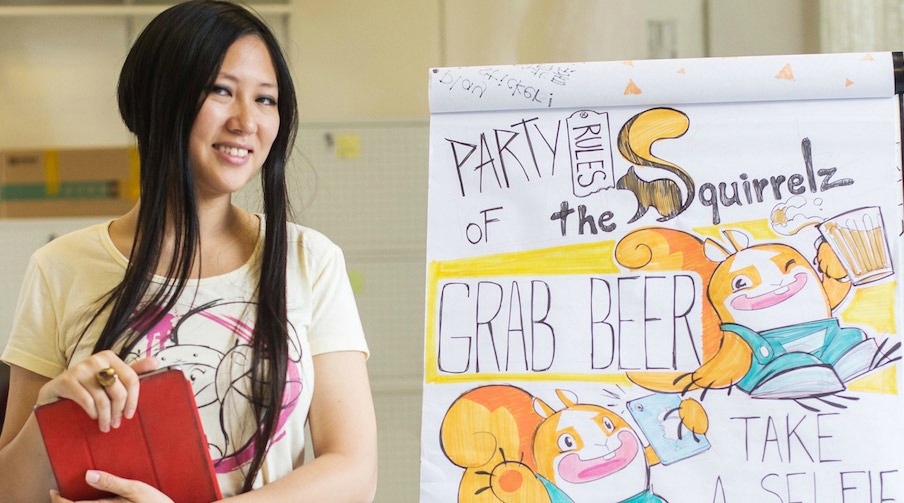 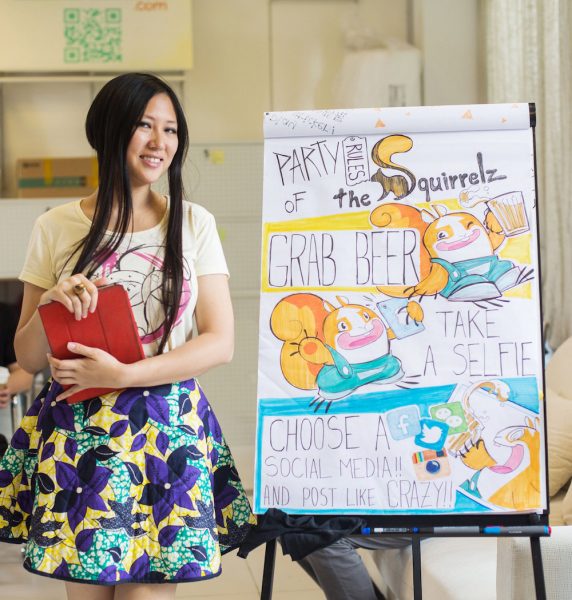 If you’ve started to collect a pile of scrap fabric, or wondered what to do with your collection of buttons, designer Bunny Yan has a solution—pay it forward.

The Squirrelz, a new app, allows designers who are looking for more sustainable solutions to the problems of a growing fabric scrap collection to list their old items for other designers to upcycle. Buttons, yarn, fabric, and other design materials can be listed to the app and traded among designers and artists in the community. Now your old pair of blue jeans don’t have to languish in the garbage—they can take on new life with another community artist.

Eco-Chick spoke with founder Bunny Yan about the project, DIY and about her own background leading up to the Squirrelz.

Eco-Chick: How did you come up with the idea for the Squirrelz? What was your background?

Bunny Yan: My background is fashion and marketing, so I had been doing that for the past fifteen years. My career started in New York—I graduated from FIT [Fashion Institute of Technology]—and the past eight years I’ve been in China. Career-wise, I’ve done everything from mass production to couture, to warehouse. It was when I was doing more production stuff in China that I realized how big the waste problem is.

Mainly because I wanted to start my own collection, and these people are throwing out or grinding down these materials or these finished products where the defect might just be that the garment’s dye is a little too dark or too light. Which means that it’s not affected as a product whatsoever. So we start seeing a half million t-shirts, ten containers of fabric, thirty tons of buttons, a ridiculous amount of things. So, in the beginning, it was gathering all the people who do upcycling and recycle online. And I started a shop called the Squirrelz–Squirrelz with a “Z”–because we all gather. Then I started linking these [designers] with reusable material from factories that gets rejected. Because it’s of quality, and it would be fine to remake things into.

So, as we kept going, we started to enter business in demand, business incubators, and we got our first round of funding. And the goal has always been to reduce waste through creativity. That’s the model. So as we continued to look at container sizes, we realized that since the quantities were so big that people who were interested were more jobbers, traders, —they can buy it for cheap and resell it.

So that kind of defeated the purpose of why I wanted to do this in the first place, to actually create, and allow more designers out there this availability. So instead of continuing with container sizes, we switched to developing this app, a free material sharing app for designers. You can put on all the material you have leftover from your project or line for another designer to take, and you can take everybody else’s free material.

EC: Such smart thinking: Have you done other projects on this theme before?

BY: We took a whole container of defective shoes from Toms, and usually they would have to burn their shoes if there’s a defect. And I understand, as a brand, if you leak out a second-rate product, it hurts your brand image—so instead, we connected with an organization that gets schoolkids to paint shoes as a project, and then they get donated to the field teams. For a brand, that means you don’t have to burn the shoes, you pay half the price to us, and you don’t have to store it, you don’t have to ship it anywhere, you get your shoes fixed for free. You get a free promotional material, and you get a tax write off, so by doing good you actually save money.

Owl organizer with fabric scraps by fabdiy.com – Get inspired & create with ‘Squirrelz’ app

EC: Awesome! And are there any particular designers or artists you know that have used the Squirrelz app? Who do you think will use this app the most?

BY: They’re all different. So I started in China, and the app I launched in the states, focusing on the New York [City] community. By doing so, I pretty much had to start from scratch. Building up your own community from scratch, it takes some time, but mainly I’ve been working with fashion school students, and targeting young designers from FIT, Parsons, Pratt and such—and another area that’s interesting is that I’ve also been targeting fabric shops, trimming shops, agents so they can put free samples up for designers to take, which means they actually get good foot traffic into their shop.

EC: What have you made from found materials through the app or otherwise?

BY: Oh, there’s lots. We have a lot of products made from the Squirrelz or inspired by it on our Instagram, we have old zippers that are made into clutches, defective clothing made into bags, recycled aluminum windows made into jewelry, so many different things.

EC: Where are you hoping to see this go? Do you think there will be more of a sharing economy in the future?

BY: So, I’m creating the very first sharing economy model for the material marketplace, and not only for fashion, as it keeps going it can be for really any material. But doing it from New York first, you can build up a community tighter. And so, yeah, it could really go anywhere, so if L.A. wanted to start, if San Francisco wanted to start, it’s all fine—you just have to look for people in your area. And if you can’t find people in your area yet, you can always recruit your own friends, and start putting up materials that you’re not using anymore and grow the community bigger. That’s the beauty of a community app, and everything is free, so there’s no added pressure.

Beautiful and classy clutches made from recycled wine corks @ekokamidesign. Love you guys! 😍

EC: What are the differences and similarities to where you were in China, Shanghai, and where you are now, New York?

BY: Shanghai is very similar to New York, as in it’s a metropolis, it’s very national—in fact, I’d have to say it’s more international, there’s Europe, African countries, Australia, there’s a big smorgasbord of different countries represented, instead of British-American, French-American, Italian-American. Everybody’s got a different accent, everybody is from everywhere, a different background, a different reason to come to China in the first place. For design, there’s a lot of foreigners in Shanghai, there’s a big community there, so you see a lot of people bring a different design, as well as a different sort of sensibility.

EC: Okay, a sillier question—Are you the kind of person who keeps everything?

BY: [Laughs] Well, I do have sort of that designer’s mind, like “oh, this is so pretty, I don’t want to throw it out!” But I also don’t have time to make it into anything. So this app helps me clean out my stuff, too! And then you can see someone make into something else, and connect with that designer, and instead of going into a recycling bin, where you never know exactly where that’s going, you know exactly who it’s ending up with—and that’s sort of magical. You know exactly the end result, and you can even calculate how much you’ve saved from the landfill.

BY: Yeah—I guess I feel with sustainability everyone’s looking to the big companies—H&M can do something, Nike can do something. And as a small designer, especially coming out of school, when you start learning about sustainability, when you come out you find out  that there is no such thing as an eco-sourcer. Like they can get you ecomaterials, but you can’t just rely on eco-sourcing, right. You’re just left with the knowledge that you want to sustainable, but with no channels. And all the news, and all the stats out there tell you how wasteful the industry is, but they don’t give you a solution to anything. So we are providing a solution—this is exactly what you need to do. Everything you get from Squirrelz, you’re contributing to—directly contributing to—reduced waste in the landfill. So that’s something that resonated a lot more, why I wanted to keep doing this. 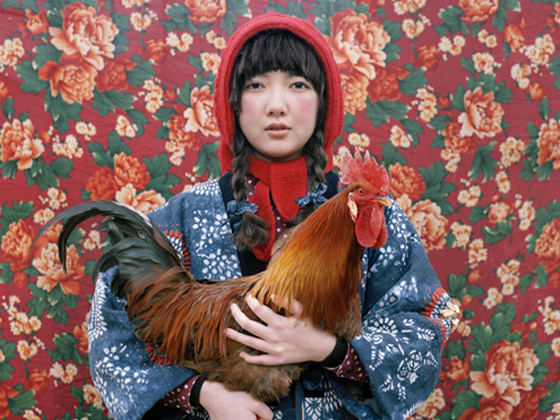 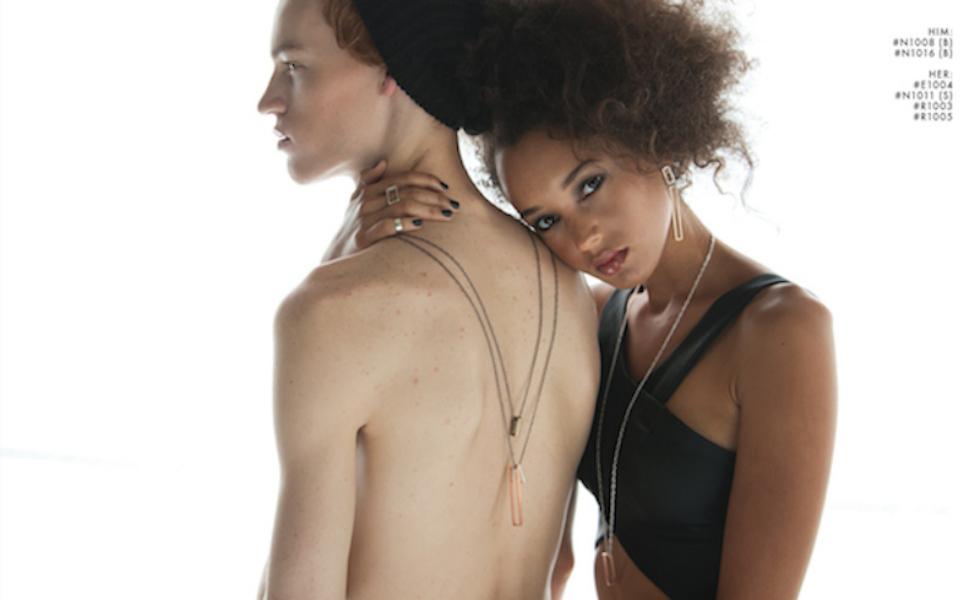