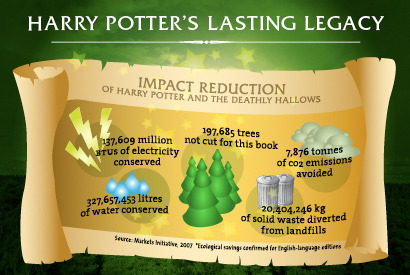 Harry Potter books give me a headache. I’ve read all of them and finished Deathly Hollows this morning.
Spoiler: I was extremely disappointed that Harry didn’t die. It would have been too cool.

The only good thing about this particular Harry Potter book was the way in which the publishers/author went out of their way to ensure that it is one of the most environmentally friendly books ever published.

The orders for Deathly Hollows have surpassed the 2.5 million copy mark at Amazon.com and just over 1.3 million from Barnes and Noble. In June the export orders from Bloomsbury Publishing were 17% above what they were for the sixth book The Half-Blood Prince. Scholastic released a record breaking 12 million copies.

Millions of Potter fans eagerly awaited the release at 12:01, some dressed up and some freezing cold – such as the Australian man who jumped into a cold ass lake to get his pre-purchase receipt. Before the release a publishing company accidentally released 1200 copies and a man sold a copy on ebay for $250. The wikipedia entry had the entire plot line detailed nearly a week before the book was ever released. I personally recommend reading the wiki and not the book…

A book this big is bound to kill a lot of trees. But instead 16 publishers used eco-friendly paper including Scholastic who wasn’t going to but then faced a boycott. This initiative saved 200 000 trees and avoided almost 7.9 kilograms of green house gases. This is the equivalent to taking 1 577 cars off of the road. In all the book spurred the development of 32 new eco-papers, 6 of which were made exclusively for the book. In comparison, in 2003 you could find one publisher printing on eco-friendly paper, but now the Harry Potter initiatives have prompted 300 publishers to adopt new and better environmental policies. This could inspire other companies and publishers to do the same saving many forests – including Canada’s own Boreal that loses a lot of life from book publishing.