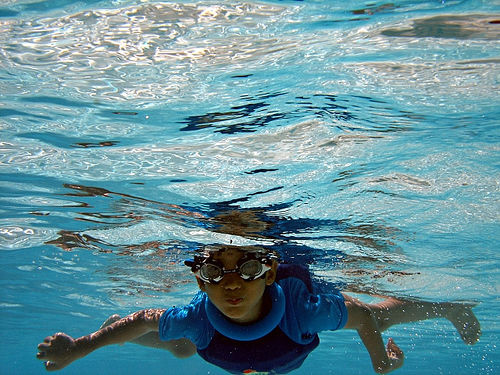 Like many other little girls who grew up with a love of animals and a talent for swimming, I wanted to be a marine biologist; what could be better than a day filled with swimming, snorkeling, diving, and playing with sea creatures? (hmmm…still a good question!) Though I started studying biology when I entered college, I finished with a BS in geology and my swimming is limited to summers and indoor pools (I live in New England).

So it was with plenty of excitement for the revival of my inner marine biologist-girl that I read through the NYTimes’ coverage of Google Earth’s new application, that not only maps, but lets you explore the 2/3 of the planet that’s covered in ocean (this just debuted February 2nd). And I’m not kidding about the exploration part.

A cute video with Dr. Sylvia Earle, formerly a chief scientist at NOAA (the National Oceanic and Atmospheric Administration) and John Henke, developer of Google Earth, explains all the ways you can explore using version 5.0 (the one that’s got the ocean additions in it). Check out integrated videos, fave surfing spots, old Jacques Cousteau film clips, and logs of sea temps.

I took it for a spin in the Pacific as I’m considering spending some time in the near future on the southern tip of the Big Island of Hawaii. I encountered photos of the shore from the water, watched a movie of lava flowing from Kilauea Volcano into the ocean, and took a National Geographic quiz about how the Polynesians likely first navigated to Hawaii (I got the wrong answer! But now I know the right one). I also learned about ‘unmanned wind powered sentry vessels,’ which are experimental robotic marine monitoring stations that float off the coast of the Big Island. Who knew?

I LOVED that one of the options that popped up was info from the Monterey Bay Aquarium’s Seafood Watch Program; the pop-up box told me that Yellowfin and Skipjack tuna from Hawaii are on their ‘good alternatives’ list. Though I avoid eating fish in general due to overharvesting, it’s a great tool for those who do eat fish and want to do it carefully- plus it’s fun to see where these fish live before they make it to your plate. This would be a great dinnertime education for kids if you eat fish at home.

I also took a tour of the geography throughout the Long Island Sound (which is very sadly marked as a seasonal marine ‘dead zone’ with a fish skeleton icon!) right off the coast of my home in South Norwalk, Connecticut. It definitely made me feel more connected to the waters just down the hill from my house; I could really get a good vantage point on how the Norwalk River, which I like to take runs along, flows into the Sound, and I could see what the underwater features off the coast were like (not terribly interesting).

Certainly there will be unthought-of creative ways that artists, scientists, educators (and bloggers) will utilize this information in unique applications. (Want to bring awareness to overfished seafood? How about a mashup wherein celebrities and their fave seafish are tracked Gawker Stalker-style? Brad Pitt could be teamed up with the endangered shark populations since he he’s expressed interest in becoming shark dinner. Where are the sharks? Where’s Brad? Let’s make sure they don’t get too close!)

Besides being damn cool, Google hopes to inspire with its information (whether it will or not is up for debate). Quoting from the NYTimes article: “With only 5 percent of the ocean floor mapped in detail, and 1 percent of the oceans protected, Google executives and the marine scientists who helped build the digital oceans said they hoped the result would inspire the public to support more marine exploration and conservation.”

As an ocean lover, I do what I can to make sure I keep our waterways alive and kicking; I don’t eat fish or endangered seafood, I don’t pour anything toxic down any drain (particularly storm drains, the contents of which flush directly into our rivers and oceans without benefit of filtration), and I pick up litter- especially plastic- on or near beaches and rivers. And now I can be a deskchair marine explorer too, and learn more about our watery ecosystems. My inner marine biologist-girl says: Thanks Google.

Adorable, Musical and Hearts the Earth

Beards Are The New Hotness!