There are more ‘green theme’ magazine issues than you can shake a stick at! 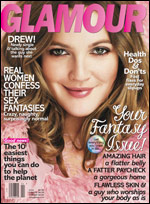 First up, there’s the April edition of Glamour, which featured Eco Chick in its links page for best Eco Sites on the Web. Thanks Glamour! 10 pages were dedicated to environmental issues, with Laurie David lending her expertise. There’s also a list of the 10 easiest things you can do to make a difference, which is great for sending to your not-so-green friends. 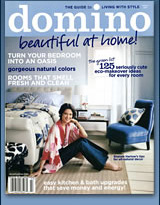 Next up is the March issue of Domino (I can’t believe I didn’t see this earlier) which is a virtual shopping guide for all the hip green home stuff. They worked with Graham Hill over at Treehugger to put the issue together, and it shows, as the mag is just bristling with eco home makeovers on almost every single page! You can tell the editors had a blast putting it together. The whole issue is a great reference. (See Treehugger guide here) 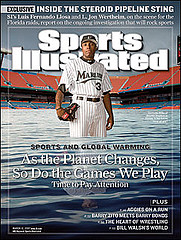 Sports Illustrated even has a (apparently controversial) issue covering how global warming may affect sports. Here’s the lead:

The next time a ball game gets rained out during the September stretch run, you can curse the momentary worthlessness of those tickets in your pocket. Or you can wonder why it got rained out — and ask yourself why practice had to be called off last summer on a day when there wasn’t a cloud in the sky; and why that Gulf Coast wharf where you used to reel in mackerel and flounder no longer exists; and why it’s been more than one winter since you pulled those titanium skis out of the garage.

Global warming is not coming; it is here. Greenhouse gases — most notably carbon dioxide produced by burning coal, oil and gas — are trapping solar heat that once escaped from the Earth’s atmosphere. As temperatures around the globe increase, oceans are warming, fields are drying up, snow is melting, more rain is falling, and sea levels are rising.

All of which is changing the way we play and the sports we watch.