In theaters on April 20, 2012, Disneynature’s newest True Life Adventure introduces Oscar, a young chimpanzee whose playful curiosity and zest for discovery light up the African forest until a twist of fate leaves Oscar to fend for himself with a little help from an unexpected ally.

Directed by Alastair Fothergill (“African Cats” and “Earth”) and Mark Linfield (“Earth”), and narrated by Tim Allen (ABC’s “Last Man Standing”), Disneynature joined forces with the Jane Goodall Institute (JGI) for a special “See ‘Chimpanzee,’ Save Chimpanzees” program. For every moviegoer who sees “Chimpanzee” during the film’s opening week (April 20-26, 2012), Disneynature will make a donation to JGI through the Disney Worldwide Conservation Fund in order to protect chimpanzees and their habitats. For more information, visit Disney.com/Chimpanzee. 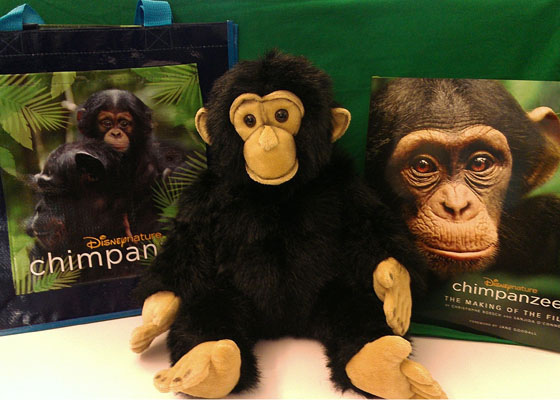 Giveaway Includes:
• One Oscar Plush
• One Disneynature Chimpanzee The Making of the Film Book
• One Reusable Tote Bag

Style Swaps! A Treehugger/Birdwatcher Exchanges Looks with a Corporate Lady