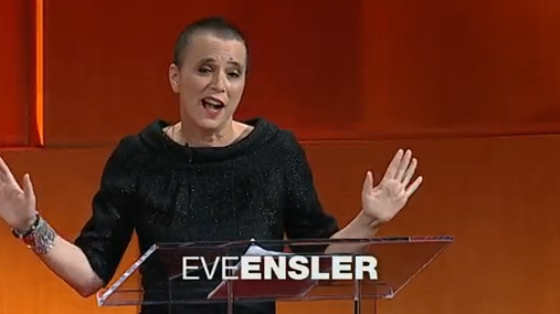 In 2008, I had a jarring encounter with Eve Ensler’s work most popular work—The Vagina Monologues. I was part of a group of women that ran the Florida State University Women’s Center, and we had decided to put together a three day run of the infamous play. I had never experienced the Vagina Monologues. I heard that it crudely discussed women’s bodies—especially their vaginas. The production gave me a heart squelching nervousness. What if my mother found out that I was involved in a play dedicated to vaginas? Luckily, At 18, I was determined to make myself a part of a group of young women who sought to deliver the campus, and the world, from the shackles of gender oppression. So, I signed up to work the door.

Grinning through my own heated nervousness, masked under starry-eyed bravery, I welcomed  all types of people into the musky auditorium. That first time that I engaged with Eve Ensler and the Vagina Monologues, I heard the whole play through the opening doors of an auditorium as people quietly walked out—swaying and smiling uncomfortably.

Lesson learned: When you are politically vocal about your body as a woman, some people don’t want to listen.

I watched the Vagina Monologues about three times with varying groups of friends, at different levels of involvement, before the message really sunk in. My body, and its need for security, its wants, dreams—its need for comprehensive healthcare, were feelings that I could encounter without shame. I could WANT  to control my sexuality, and fertility. I could WANT boyfriends, or girlfriends, or no friends. As a woman, my life had an untapped impossibility.

Now, in 2014, as I am dealing the emotionally high ramifications of the highest court in the land telling me that a corporation has greater corporal autonomy than we, hormone-therapy-needing, not-ready-to-take-care-of-a-child, red-blood-bleeding women, I can’t help but look to Ensler for courage. I have always LOVED her TEDtalk  titled, Suddenly, My Body for its poetic wisdom. It has guided me through the difficulties of becoming a woman in a world that is hostile to the diversity of a womanish self.

In 2011, I found out that Eve Ensler, in a wonderfully eloquent TEDtalk , who had spent years living in, and loving other women’s bodies, had not really come to understand her own. After years of being a glamorous representation of chic fashionable feminism, she, like many american women succumbed to a horribly degenerative disease—and survived it. Cancer taught her a lesson that we all need to remember, and that I struggle to remember, and its that: Everything Is Connected. In this TedTalk from 2011, Eve comes to an epiphany that it will take a lifetime to learn, and even more generations to teach:

I know that everything is connected, and the scar that runs the length of my torso is the markings of the earthquake. And I am there with the three million in the streets of Port-au-Prince. And the fire that burned in me on day three through six of chemo is the fire that is burning in the forests of the world. I know that the abscess that grew around my wound after the operation, the 16 ounces of puss, is the contaminated Gulf of Mexico, and there were oil-drenched pelicans inside me and dead floating fish. And the catheters they shoved into me without proper medication made me scream out the way the Earth cries out from the drilling.

I am on the long and arduous journey of connecting the agency of my body to the agency of the planet. In a world where 70% of women are poor, we are at a disadvantage politically, economically, and socially, but we do not lack power of spirit. Wherever we live, we need to let our leaders know that the liberation of women, and their bodies, is the liberation of the earth. Our mission is to  disconnect from wars, and fostering communities.

It’s raising children as what they are, not mothers, child soldiers, or prostitutes but minds full of awe and ready to discover their bright and ever changing selves.

Heroines for the Planet: Model and Skincare Chef May Lindstrom