Rana Plaza: On April 24, 2013, 1,134 people were killed and over 2,500 injured at the Rana Plaza garment factory in Bangladesh. Some of them are still missing, their bodies lost to the race for the fashion bottom—the two dollar t-shirt.

The truth is that they didn’t have to die.

The Rana Plaza disaster didn’t have to be the most fatal garment industry of all time (and yes, there have been plenty of other “accidents” at garment factories that killed fewer people, usually women, which didn’t get as much attention). An ethical industry that had learned from its mistakes could have prevented these events with some tried and true regulations. The industry had already encountered a similar situation a hundred years or so ago at the 1911 Shirtwaist Fire when 149 young women lost their lives to a garment factory fire in New York City. Some of them jumped from buildings, begging for their lives, in the same way that the Bangladeshi garment workers were being asked to be cut out of the buildings in which they were trapped—huddled together. 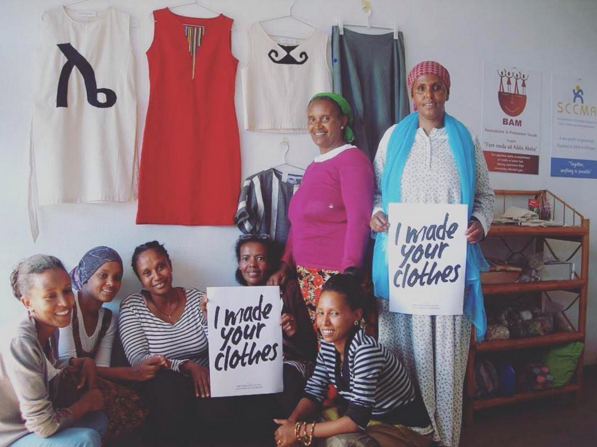 Bangladeshi photojournalist Ismail Ferdous, who was one of the first responders and volunteers on the scene, called it a “war zone.” The Triangle Factory fire in NYC was the tipping point that brought us some of the workers’ rights that we have today. The tragedy at Rana Plaza ripped the synthetic wool right off of our eyes and we realized that something had to change, and it had to happen now.

That’s precisely why the sustainable fashion community has been working hard to get the word out to consumers, make changes within the industry, and help change laws—and the focus of many of those efforts comes to a point each April with Fashion Revolution Day (and the week surrounding it).

Fashion Revolution Day’s aim is to stop a tragedy of the sort of ever happening in order to solve the problem from where it starts: us.

Founded as a response to the tragedy the goal of Fashion Revolution Day is to remember those people who lost their lives at Rana Plaza and to move the cultural landscape towards a more ethical approach to garment production by asking that we hold our brands accountable for the way our garments are produced.

Founder Cary Sommers wants us to ask a simple question of ourselves and brands, “Who Made My Clothes?” This simple question can help us demystify some of the myths around fast fashion advertising. Putting a human face to our fashion process, understanding that someone had to sew that three dollar shirt, and probably made pennies to the dollar on it, and asking telling companies that we care about those people is the first step to a revolutionarily different industry. Asking questions is the first step towards solutions! 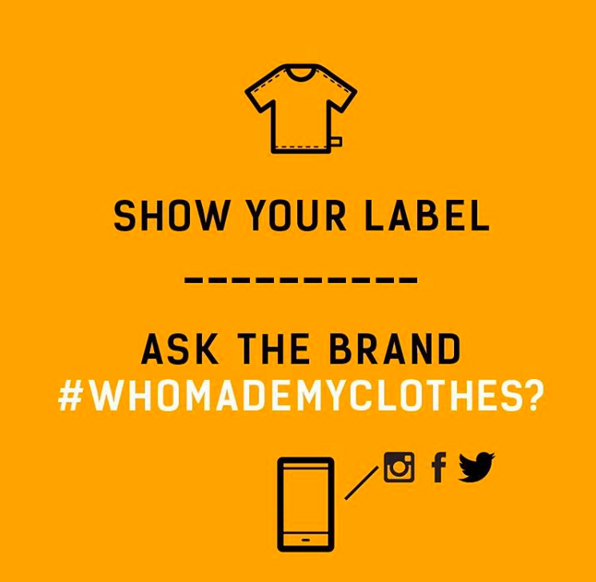 Fashion Revolution Day has evolved over the past few years and is now Fashion Revolution Week: From April 18-24th of 2016, thousands of people from over 70 countries will be asking their favorite fashion brands: WHO MADE MY CLOTHES? Depending on where you live there are a slew of events to participate in including talks, protests, and other interesting tactics to move the current industry to a more sustainable system? By showing them we care about who makes our clothes, and how much we care, we can be the voice of change.

No matter where you are, you too can participate. Here’s how:

Find some Fashion Revolution Week events in your city! If you click here, you’ll be able to find some events near you  which may include a series of talks at FIT in NYC, Pop-Ups in San Francisco, and a Fash Rev Week event at Rutgers. Not in any of those cities?

Google: Fashion Revolution + the name of your city to find more local events near you.

Most importantly, you can begin/continue a journey of shopping more ethically whether it’s through sustainable brands, more vintage and used clothing, DIY, or clothes recycling, you can make an impact one step at a time.

Wherever you are, join use here at Eco-Chick to celebrate Fashion Revolution Day! We’re looking forward to a safer and more ethical industry that we’ve built together.

What Does Made In USA Really Mean? The Textile Test Series Investigates