I was lucky enough to be asked to judge Princeton University’s first-ever Sustainable Fashion Competition a few weeks ago, and it was so much fun. The event was organized through student group Greening Princeton. 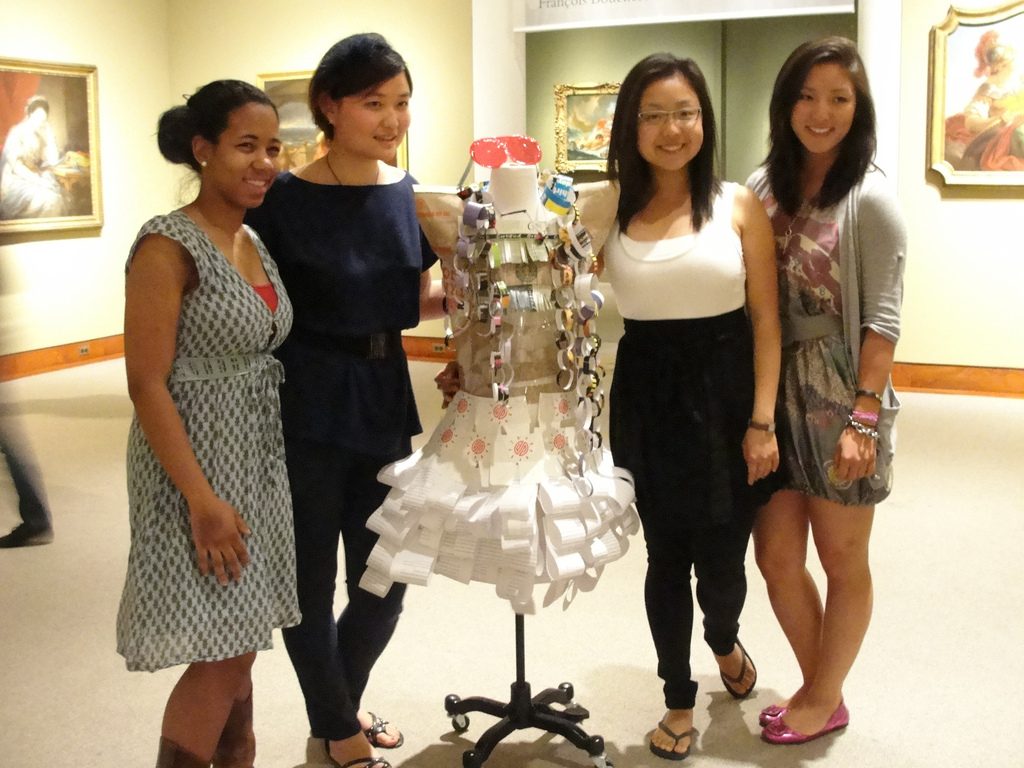 Kelly Rouser, Chenyu Zheng, Laura Bai and Sarah Chen of Greening Princeton with one of the entries to the competition.

There were some extremely creative pieces entered as part of the competition; some of the nonwinning designs were still incredibly well thought-out, including an asymmetrical handmade dress from recycled t-shirts with a flourish neckline created from plastic bags that reminded one of petals in contrasting colors.

A robe created from cast-off tees in a patchwork design (the idea originally came from the entrant’s lightweight quilts made from the same materials), and a perfectly cut and sewn skirt made from Whole Foods paper bags were shown, as well as a bracelet made from wires salvaged from an old elevator. A Gary-Harvey inspired dress made from three pairs of jeans was one of my favorites, and also extremely wearable. 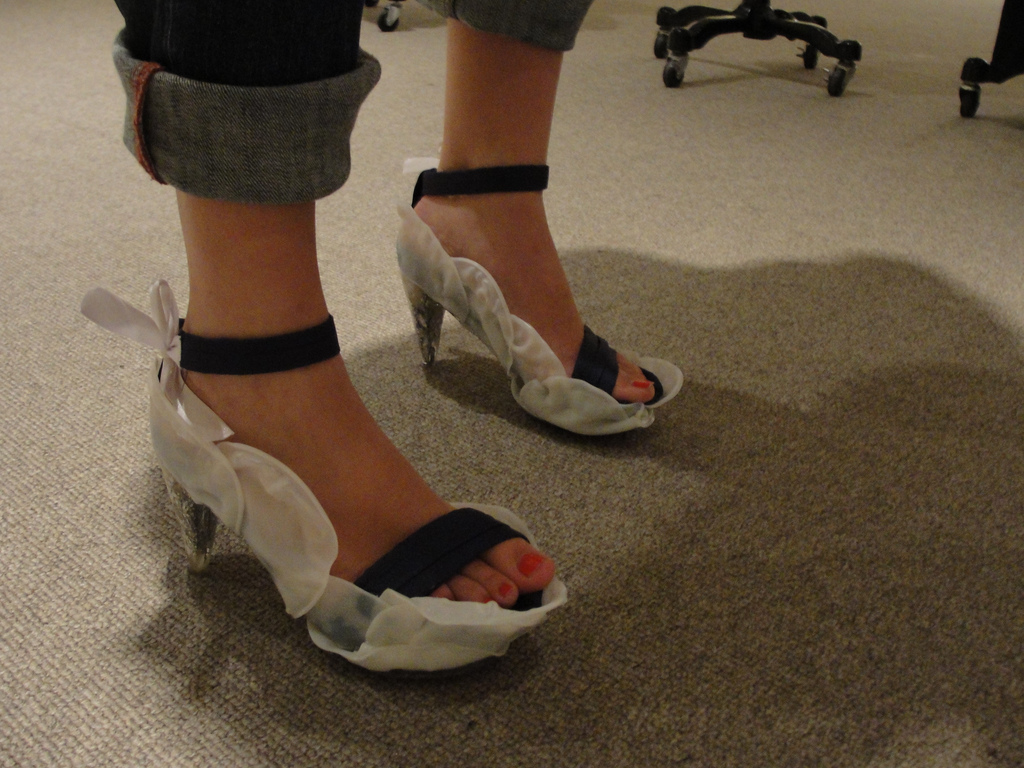 The winner of the competition was Maddie Douglas, a chemistry major with certificate in visual arts who created a shoe made entirely from #6 plastic cups, and a jacket made from the thick fabric-like foam packing material. Not only were both pieces made from some of the worst-of-the-worst garbage that gets tossed (foam and plastic takes thousands of years to break down, and releases toxins while it does so), but the designs themselves were elegant and well thought-out. The jacket was not only visually interesting, but keeps the wearer extremely warm (and allows the wearer to show off a pretty shirt underneath). 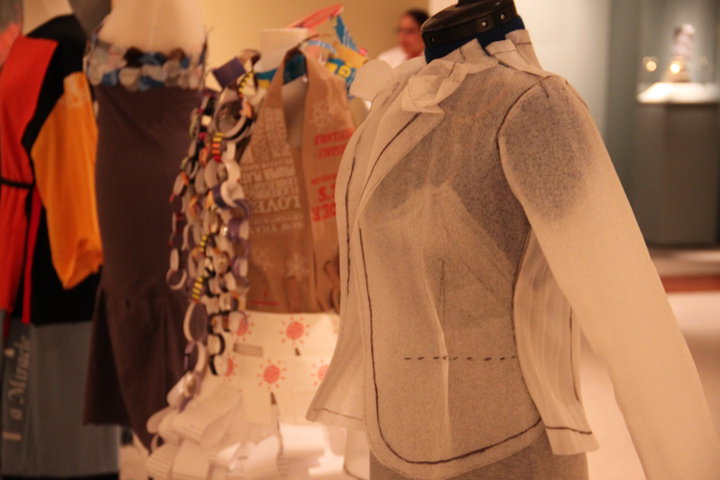 The plastic for the shoes still showed some of the original cup shape because instead of simply melting the plastic down, Maddie ‘slumped’ it, which is a chemistry term for collapsing a material up to- but not beyond- it’s melting point. Maddie told me it took 10-12 cups to make each shoe and that she found the cups in the trash cans outside the local bars in Princeton. The shoes she showed were her third round of experiments on the design and technique, and were totally rockin’. 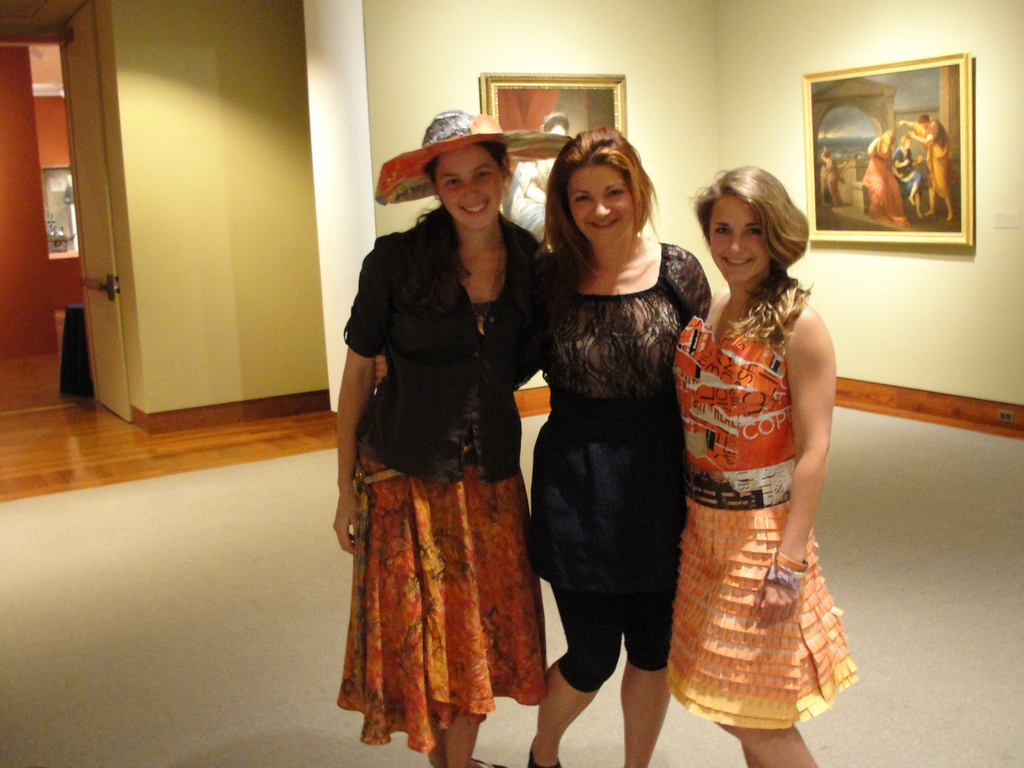 Jessica Lander, Starre Vartan (middle), and Julie Dickerson in Julie’s recycled dress (right, made from tickets and movie posters) and a saucy hat (left, made from posters). .

Julie Dickerson, an Art and Archeology major and Jessica Lander, an Anthropology major took second and third places, respectively, for their recycled creations. A dress bodice made from gesso’d canvas that was left over from her thesis project, a glove from bubble wrap and an ‘Easter egg’ pouch/purse made up a whimsical outfit from Jessica, who said that it was important to ‘accept the funk’ that happened during the design process. Julie’s dress made from ticket stubs and movie posters went with the idea that this was a dress “for the theatre, by the theatre” and called her ensemble “Showtime”.