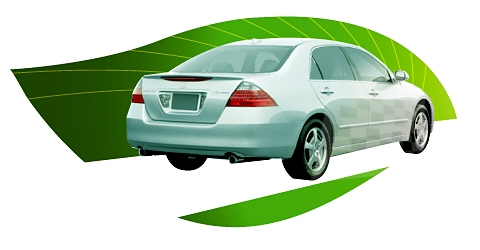 When I set out to look for my next car, i had a feeling the list would be short. A born again friend of the Earth, I knew that I would be relegated to a cute little Prius, or a fairly powerless Toyota Camry Hybrid. Now don’t get me wrong, those cars are tremendous technological achievements, with nearly zippo emissions and high mpg. But why do I have to drive Miss Daisy just because i want to spare the planet?

Then i checked out Honda and found my next car.

The Honda Accord Hybrid is the first car I’ve found that offers scintillating performance in tandem with near zero emissions (its a PZEV, a Partial Zero Emissions Vehicle). Granted there are some pretty amazing hybrid offerings from Lexus, but unless you are in the 100k income bracket the closest you’ll get to sitting in one of those is at an auto show.

The numbers, for those of you who care for bragging rights, are downright gaudy for a working class car:

Unlike other hybrids (cough cough Prius) which claim mpg’s of 50 and 60, but in reality only deliver in the low 40s, this car actually meets its expectations. And the warranty is just as impressive as the engine: 8 years on battery components, and a 15 year warranty on emissions control components. Why not check out this turbocharger Cummins Holset here?

The car has only a few annoying quirks. For example, the rear seat doesn’t fold down, which is frustrating considering the car is a midsize sedan (the battery blocks access to the trunk). So I guess I’ll get some weird stares when I have my hockey sticks stored on a roof rack. And then there’s the price. Don’t get me wrong– you definitely get what you pay for with this car– but it’s still over 30 grand, putting it in the same class as the more prestigious 3-series BMW, or Audi A4. If you’re trying to impress your clients, this car probably isnt the way to go. I also think the sales of this car would have benefitted from more stylish design cues to separate it from the regular gas engine counterpart.

The Accord hybrid won’t save you as much money at the pump as other hybrids, but you still get the same nearly zero emission effect while idling or driving at lower speeds. There is a subtlety of engineering at work too; unlike the Prius, which turns its engine off completely when the battery kicks in, the Accord drives just like a regular gas-powered car with the assistance of battery power. No whirring, or fancy dashboard graphics to advertising your tree hugging greatness to the world. In fact other than the hybrid logo, this car is one stealthy green machine.

Honda has done right by car afficiados and environmentalists alike, and once again proves itself to be a leader in automotive inginuity.

Regular car wash can do wonders for your car, which is why you should visit a car wash service station or clean your car by yourself at least once a week. Don’t forget to include the pre-wash process to remove as much dirt and grime on the surface of your vehicle as possible.