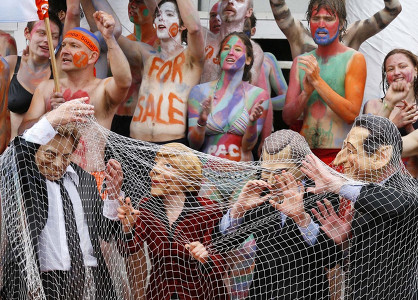 Over the last year, people in Rostock, Germany have been preparing for the coming week as though there’s a hurricane brewing off the coast of the Baltic – boarding up windows and building fences and booking tickets to get out of town. And though hurricanes are a relatively new occurrence here on the Continent (the first struck Europe just last year, and this winter Germany has seen two winter storms with hurricane-strength winds), a natural disaster is indeed whipping through the country as the tiny resort town of Heiligendamm plays host to the 2007 G8 summit this week.

Protesters have been organizing and making preparations for the last year, and police have been responding with some less than stellar techniques. A tremendously violent riot on Saturday, unfortunately, detracted from the real issues at hand. One of these issues is climate change. Germany’s Chancellor and hostess to the G8 summit, Angela Merkel, has serious proposals to counter climate change on the agenda for this year’s meeting. From Der Spiegel:

Merkel wants a commitment from the world’s richest nations to limit global warming to 2 degrees Celsius (3.6 degrees Fahrenheit) this century and to cut global greenhouse gas emissions by 50 percent below 1990 levels by 2050.

The irony of this is that some policy experts here feel that Merkel is “as green as a chameleon” (one of her ideas for reducing the country’s oil dependency for energy is to burn more coal). But that’s another story. 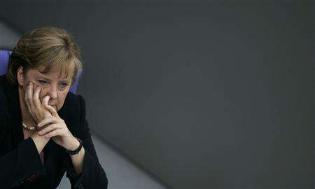 Merkel’s also heralded here as a friend of George W. Bush, but it looks like she’s not too happy with the US’s stance on climate change policy. Some changes to the agenda that were required by the White House went unheeded, leading to Bush’s circuitous speech last week. Again from Der Spiegel:

“It’s important to ensure that we get results, and so we will create a strong and transparent system for measuring each country’s performance,” Bush said. “This new framework would help our nations fulfill our responsibilities under the UN Framework Convention on Climate Change. The United States will work with all nations that are part of this convention to adapt to the impacts of climate change, gain access to clean and more energy-efficient technologies, and promote sustainable forestry and agriculture.”

The media here has suggested that Bush’s speech, while saying nothing groundbreaking nor proposing anything that reflects the immediate necessity of action against climate change, has “torpedoed” the dialogue about global warming. I’m interested to see what becomes of this summit. Will Merkel and Bush remain cozy bedfellows? Will anything actually come of this multi-million dollar meeting?

If you’re as interested as I am in this soap opera of the wealthy and powerful nations and want to see more information about the G8 from the German perspective, two websites in English are devoting extensive coverage: Der Spiegel and Deutsche Welle.

And stay tuned for next week’s installment of “The World is My Playground: The Summit of the G8.”

What Does a Terrestrial Oil Spill Look Like? Chevron’s Mess in the Amazon