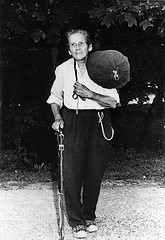 I used to hear that for every woman on the Appalachian Trail, there were twenty men. That number is probably an exageration, but if you ask the women who walk the 2200-mile trail from Georgia to Maine, many of them will tell you that a boy’s club vibe prevails. The woods are, after all, one of the few places left in America where a man can be a man. By contrast, it’s said that the women who make the five-month journey just “get mean.”

So, cheers to the first woman who ever got mean on the Appalachian Trail. In 1955, a 67-year-old grandmother set out from Georgia in a pair of Keds, carrying little more than an old army blanket and a shower curtain for a tent. Five months later she reached mile-high Katahdin in Maine where a strong wind nearly blew her off the summit as she belted out “America the Beautiful.” According to Sports Illustrated (10/10/55), when asked why she hiked the Appalachian Trail, Emma “Grandma” Gatewood replied, “Because I wanted to.”

It’s worth noting that the Appalachian Trail of Grandma Gatewood’s time was tougher than the one popularized by Bill Bryson’s A Walk in the Woods. Thru-hikers today can stay in hostels every couple of days, gear is lightweight and easy to use, and painted white blazes on the trees make it nearly impossible to get lost (unless, of course, you’re a creative non-fiction writer like Bill Bryson).