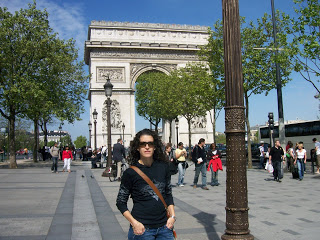 So I think I have used up my allotment of fossil fuels for at least the remainder of this year, or more likely the next decade. Why? My husband surprised me with a birthday trip to Paris last weekend.

Americans have a love/hate relationship with the French. So of course as an American and a “greenist,” I had to do some hardcore observations of Parisian “green” habits and compare them to what we do here. What I discovered from my four days in the “City of Lights” is as follows. 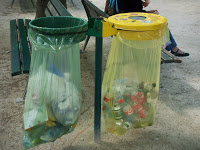 There is a recycling program in place in Paris, but I am not sure if the Parisians are interested. On some streets they have huge recycling bins for bottles and cans, but most of them were covered with graffiti (which happens to be all over the city). In the parks, they have recycling bags next to the the garbage bags but as you can see in the picture, 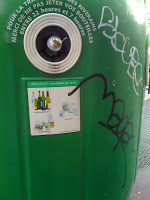 recyclables are also placed in the garbage bag. On a walking tour the Marais, I asked our tour guide about how well Parisians recycle. She said they are horrible and during our tour she opened a recycling bin from an apartment building to show us what she meant. It was filled with recyclables and non-recyclables.

(2) Reusables
My husband and I went in a few supermarkets (which I love to do whenever I travel abroad), and outdoor markets and I think I saw maybe 5 people using reusable bags. The worst was in the outdoor markets where you can buy fruits, vegetables, meats, cheese, bread, fish, flowers and much more. The biggest one we went to was in Versailles, and everything was put in a plastic bag. Many did bring their own reusable totes but those bags were then stuffed with plastic bags. It appeared to me that they may use more plastic bags than we use. 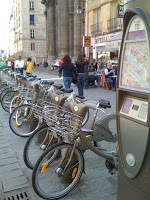 Paris is a very busy city with lot of traffic. But I would not say that they have any more traffic then New York City. They do drive smaller, and most likely, more efficient cars (I didn’t see one Hummer or SUV) and many people ride bikes and take the subway. I think more people ride bikes in Paris then they do in Manhattan–but not as many as in Beijing. But the most ingenious thing that we observed in Paris was a bike rental system called Velib. The system began in July 2007, with 10,000 bikes, and now they are up to 20,000 bikes all over Paris. Riders can buy monthly, daily or hourly passes to rent bikes stationed at more than 1,400 automated stations across the city. A bike can be rented from one station and returned to another. From what we saw, and from the doubling of the number of bikes in use, it appears that the Parisians love the system. My husband and I wished we had more time to try it out. Its funny, the first few days in Paris we weren’t sure what these bikes were. Initially we thought they were motorized, then we didn’t understand the rental system. By the time we figured out what was what it was it was time to go. I wonder if this would work in NYC? 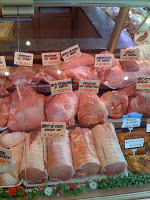 You should know that I have an obsession with food. Our trip to Paris had some gastronomic highs–the picnic in Versailles– and some lows–dinner at Chez Andre off the Champs-Elysées. So of course I had to find out where the French food comes from. I think this is a department that they really do better than we do. French farmers say no to GMO’s –they even strike and riot to oppose them on a semi-regular basis. None of the fruits or vegetables grown in France are from genetically modified seeds. NONE! We can’t say anything like that here. You can also find organic produce in Paris. We spoke to some butchers and they insisted that none of the meat is treated with antibiotics or hormones and that beef is grass-fed. One of the butchers we spoke with even made a stink face when referring to grain fed beef. I could not find anywhere on the internet to confirm or deny this so I have to take their word, for now. I did ask Shannon Hayes, a grass-fed beef farmer from Sap Bush Farms and author of The Farmer and the Grill and she said “It is my understanding is that not all meat in France is grass-fed. But a fair amount is. Quite often it depends on the breed – charolais beef, for example, is supposed to be exclusively raised on grass. When I was there I saw a lot of cattle grazed and fed in the barn – a model that is infinitely more sustainable than factory farms, but not, according to our strict definitions, grass-fed. The meat is also much more likely to be raised on small farms, not from confinement facilities.”

So what do I take from my trip to Paris?

1- Thank you Lewis…I didn’t thank you when I was there, but I’m thanking you now.
2- The food there was at times overrated, and at times sublime. The baguettes in Versailles were the best I’ve ever had.
3- We might do a better job in recycling, and in moving towards a bagless shopping experience, but I’m not sure.
4- The quality of the produce in Paris far surpasses what we have here. I was thrilled by the freshness and the quality and the shopping experience.
5- Four days is just not enough time to be in Paris, but we missed our kids, and wanted to come home.
What are some of your “green” international observations?

To find out more about me ,check out my blog by clicking here.