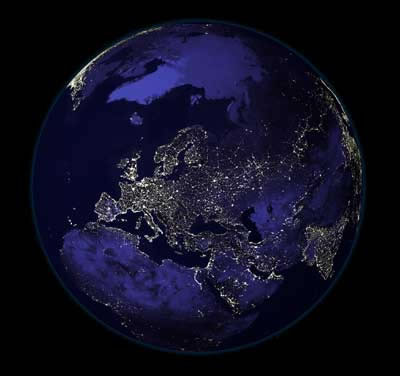 In this image from the Smithsonian, you can see the lights of Europe at night, whereas most of Africa is dark.

As an inveterate night owl, reading this article in the Independent really made me think. The piece makes the point that most Africans don’t have access to electricity in the form of a grid, as we do here (where we seem to do our very best to waste it, but anyway), and therefore aren’t able to work much outside daylight hours. I can’t imagine being unable to work half the night away, whether I’m typing away on my laptop, watching a movie, reading, even vacuuming and doing yoga. I would certainly be less productive, and I wouldn’t be able to run this site, period since I do most of my writing for it between 11pm and 2am.

So how do we give the African people the ability to work all night if they want to, without sucking up fossil fuels to run these fun blinking machines? Setting up a grid like ours would not only be an environmental disaster, but it is a financial impossibility for impoverished nations.

Many of the continent’s poorest people are dependent on kerosene lamps or candles, and typically spend at least a 10th of their income on lighting
their shacks. The lamps often kick out more smoke than light, and there are frequent stories of huts going up in flames as they get knocked over. People
with a bit of extra cash may invest in a small diesel generator, but the extra illumination and the reduced danger does not quite compensate for the
noise and the polluting fumes.

The World Bank wants to sell LED’s, and suggests hooking them up to people-powered machines. LED’s use less than a watt of power to create light to read by, and while we may only be familiar in them for small lighting tasks, the technology for LED’s has come a long way, meaning they could provide an answer to part of Africa’s lighting puzzle.

Lighting Africa officially launches on 4 September, when organisers will unveil a competition for the design and delivery of low-cost, green lighting
products for low-income consumers in sub-Saharan Africa. More than 350 companies have already expressed an interest – from Africa-based small
businesses to multinationals like Philips.

Unfortunately, there’s no mention of solar power in this article, though this would seem to be the obvious answer, as much of the poorest parts of Africa are known for their direct access to equatorial (meaning very regular) solar energy. Large hydropower projects ARE mentioned, without any commentary provided on the environmental destruction of this form of energy generation, which would seem to be a major oversight in the article. It sent a shudder down my spine to think of Africa’s largest river, the Congo, dammed along it’s long and winding path, which would disturb all the ecosystems along its route if regular flooding events were to be eliminated. At this point, there doesn’t seem to be money enough for this kind of huge hydropower project, so I’m hoping in the meantime solar panels become cheap enough so that Africans who want to stay up half the night reading don’t have to sacrifice their environment to do so.

Thanks to RemyC for the link!