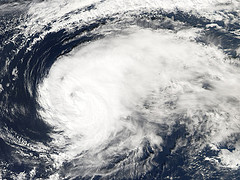 Two years ago, my husband and I were invited to a presentation by one of Germany’s top Climate Change Researchers at The Wuppertal Institute in Berlin. I forget the presenter’s name now but remember bits and pieces of what he said … mainly those things I’d never heard before.

Like that the way the climate has been changing over the last century – carbon emissions related or not (he was being diplomatic because the audience was strictly American and this was before global warming became a topic the Administration talked about) – would result first in an intense warm weather cycle throughout Europe that would occur for about a decade. The hot weather would result in fires, deadly heat waves, and devastated crops.

It sounded exactly like what happened during the summer of 2003, when I’d first lived on the continent. In Portugal, forest fires raged and in France, hundreds died from heat stroke. Though the weather hasn’t been exactly deadly warm here in Germany since then, last summer proved murderous in Italy, Croatia, Spain, and Greece, with temps over 100 degrees for days on end which produced forest fires and droughts. An early spring and mild winter meant a potato shortage (!) up here though and some seriously confused birds who returned from their southern migration early.

This expert presenter then said that the heat would be followed by an intense cold weather cycle that would prove equally, if not more devastating, as the Gulf Stream changed and pushed Arctic air down into Germany. And I’ve got to say – after a winter visit to Wisconsin, where temps dipped to -20 with a much lower wind chill, I’m so hoping that this prediction doesn’t prove true…

What’s a bit eerie, though, is that a third prediction he made, one I thought impossible, has proven twice in the last two years to be true. Prior to 2005, Europe had never seen nor experienced a hurricane. But as part of the warmer weather, Germany’s just lived through its second in two years (the first ever to make landfall on Europe was in 2005, a Category 1 that hit the Azores Islands).

Hurricane Emma started on Friday and with winds of up to 120 km/hour (that’s about 70 mph), it’s not nearly as bad as those that make landfall in the US annually. And Germany’s Baltic and North Sea coasts, including the port city of Hamburg, are barricaded against sea storms nicely, with storm walls and a series of locks and floodplains that have been successful in preventing surge damage. But the rest of the country certainly isn’t prepared for storms like this, as was shown Saturday. The country kept up business as usual – Cologners visiting the daily vegetable market, where veggies were literally flying off the shelves and travelers hopping high-speed trains that were hit by falling trees.

As someone who evacuated Hurricane Andrew just a day before it hit, I realize that Germany’s been pretty lucky to not have incurred the serious damages Florida faces every year. But if this is a sign of things to come (and if it proves Mr. Wuppertal Institute’s predictions true), I may be in need of a new home soon and the assistance of public insurance adjusters.

San Francisco Green Fest This Weekend— Be There!