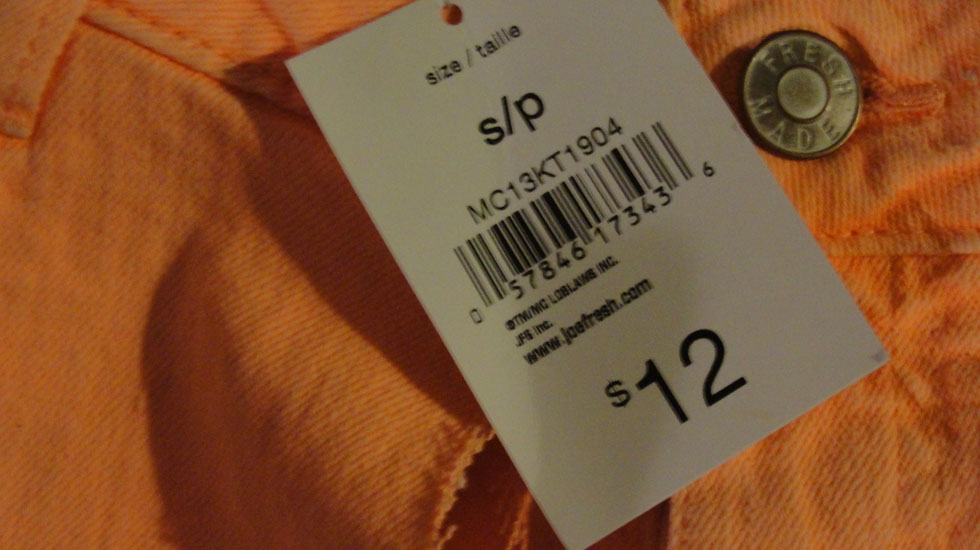 I wasn’t expecting much when a Joe Fresh store opened on the corner of 5th Avenue and 16th St. (which is literally a half-block from my boyfriend’s apartment). I watched with interest as it got its new-store makeover—it’s expensive real estate and the spot used to house an Esprit—and quickly stocked with clothing. I could tell right off the bat that it was likely going to be filled with cheap-as-cheap-can-be clothing because everything about it looked low-end-disguised-as-clean-and-happy. I read up on Wikipedia about its being the brainchild of designer Joe Mimran (a Canadian!), and how it is one of those ‘vertically integrated’ brands that seems to be taking over the fashion landscape.

As the store opened, and the months went by, I watched the displays change, and was first just hit with how incredibly BORING the designs were. Like a Gap rip-off, but not even as interesting as Old Navy (not that I think Old Navy is that great). I started mocking it every time I walked by, and my boyfriend and I had a running joke about actually going in.

One day, we did. I was horrified but the merch up close. Crummy craftsmanship, the junkiest materials, and the prices were unbelievably low. $12 or $15 for almost everything, all of it made in Bangladesh, Cambodia, China; not one thing made in the USA or any country that has strict labor laws (I especially looked). I even tried a few things on, and the fit was atrocious (I’m a totally average size 8, so I never have fit issues). I had been making fun of the store in my head for at least three months (“Joe FRESSSSSHHHHHH!!!!”) but even I was shocked but just how crap everything was. 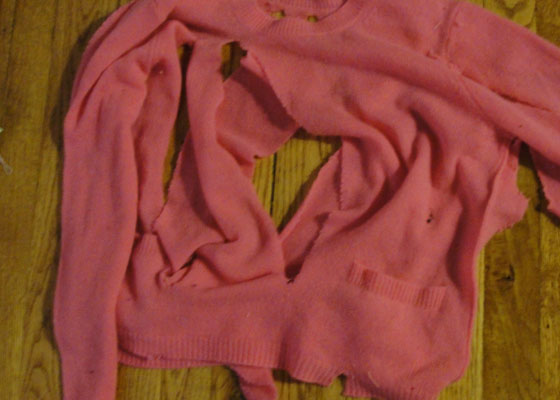 A slashed pink sweater. I’m sure there are plenty of homeless women who would have loved such a bright piece in the middle of winter.

I didn’t think too much more about Joe Fresh until one freezing night I was headed to my boyfriend’s place. I saw a clearish plastic bag sitting in the garbage heap outside Joe Fresh and it was filled with colorful fabrics. I opened the bag and it was filled with new clothes (with tags, see above and below), that had been shredded. Brand new clothes, which later, when I pieced them back together, had no other visible issues (no spilled coffee, unravelled hems, etc.). I thought of the homeless families from Hurricane Sandy, the women and children who lost ALL their clothes due to flooding; I thought of the people struggling to put together clothes to go to work in, the myriad people who would have loved a bright and fun piece like those shown above, even if they aren’t high-quality (at least they would be used).

And I got SO ANGRY. Because it’s not bad enough that this stuff is made in countries with unenforced labor laws where women and children die in factory fires, it’s not enough that dying it up pollutes the rivers and ecosystems where the fabrics are made, or that the non-organic cottons dumps toxic chemicals into the soil (and people’s bodies where cotton is farmed). It’s not enough to fly clothing around the world just to put a label on it, and fly it back to add the buttons, adding to the climate change we have all just begun to feel; it’s not enough to make something as cheaply as possible because poor people in other countries will let you take advantage of them. But then you destroy those clothes so that nobody else can ever wear them?

Incensed would be the word to describe what I feel about this insanity of wastefulness.

The bad news? According to July article in the Globe and Mail, “Loblaw said it will roll out almost 700 Joe Fresh shops next spring within troubled U.S. department-store retailer J.C. Penney, getting close to achieving its goal of running as many as 800 Joe Fresh stores across the United States.”

I’m pretty sure that this post will only get employees in trouble, or make them start using black bags that one can’t see through and won’t change how Joe Fresh does business, but it’s just too infuriating to let pass. I welcome comments from Joe Fresh via my email address on the contact portion of this site about what their possible justification for this could be.

Click on any of the images below to see a larger view and the rest of the slideshow.

Blood Diamonds: Why We Still Hate Them