Kobori dispelled an urban legend that he’s encountered. The biggest impact of apparel on the environment is not consumer care, or how we wash and dry our clothes, as most people assume. Cotton cultivation has the most significant  impact on water consumption. A new study the company released backs up his claim.

In the new report released on Tuesday, Levi Strauss unveiled the results of its latest product life-cycle assessment, an update to its original, first-of-its-kind 2007 study that examined the environmental impact of Levi Strauss & Co. products. A Life Cycle Assessment (LCA) is a tool that assesses the different environmental impacts of a product. It follows the process from the very beginning where the raw materials are grown, mined or synthesized, through manufacturing and consumer use, to disposal or recycling. 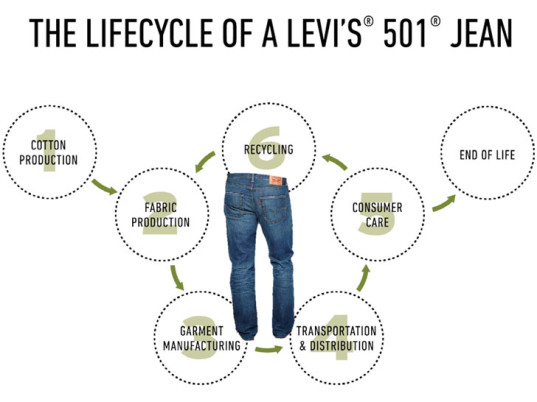 The study shows that of the nearly 3,800 liters of water used throughout the lifetime of a pair of jeans, cotton cultivation (68 percent) and consumer use (23 percent) continue to have the greatest impact on water consumption.

“If everyone in the U.S. would wash their jeans after every ten wears instead of every two, we could save more than 270 billion liters of water,” said Kobori.

Consumer care is also responsible for the most significant energy use and climate impact, representing 37 percent of the 33.4 kilograms of carbon dioxide emitted during the a jean’s lifecycle.

To address these findings, Levi’s has partnered with the Better Cotton Initiative to train farmers to grow cotton using less water. The company says it will continue to use less water during manufacturing with its Water<Less™ process which was launched in 2011. To date, Levi’s has saved more than 1 billion liters of water in the manufacturing of products, including 30 million liters of fresh water saved through reuse and recycling.

Curious as to how your water and energy use compares with others? Take Levi’s “Are You Ready to Come Clean?” Quiz and take the #WashLessPledge”

7 Gorgeous Coats That Will Get You Excited for Winter