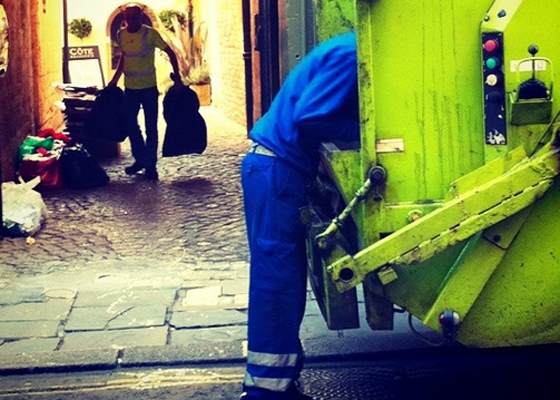 We’re acutely aware that there is no magic place called “away” where our garbage goes. But when it comes to recycling and actually doing something about it, the old saying ‘out of sight, out of mind’ goes for many. In the U.S. alone, over 7 billion pounds of PVC is thrown away each year; and of that amount, only 18 million pounds (approximately one-quarter of 1 percent) is actually recycled. The UK fares a bit better: Roughly 25% of the their plastic waste is recycled.

Savvy London-based company What a Load of Rubbish is changing the way citizens and organizations handle their rubbish, or, as we say in the States, ‘trash.’ Their rubbish removal specialists pick up any and all kinds of garbage — no matter the size — from homes, offices, hotels, schools, constructions sites, you name it, and deliver it to transfer stations where the garbage/rubbish/trash/junk whatever you’d like to call it, is sorted and recycled in the most responsible way.

The company empowers people to take responsibility for their trash without having to do the dirty work. Their customers sleep better knowing they’ve done right by their trash and the environment, and they save valuable time which can be spent on life’s myriad of demands. The company even provides documentation so customers understand precisely where their trash goes.

Their service is to be of service to the earth and humans’ health in more ways than one. Not only do they save copious amounts of garbage from being sent to landfills where toxins often seep into the earth and waterways, but they protect precious natural resources from depletion in the future.

A company like What a Load of Rubbish who makes it their mission to help humans preserve the earth gets an A+ in our book, no matter where in the world they’re located.

Sell Your Phone on eBay and Finance Your Vacation? I Am!

The Future of Renewable Energy