Last week I got the chance to tour around 30 Rock (not the show silly, but NBC’s actual offices in NYC) to see what Big Media’s doing about green. And while I was definitely impressed with all the Green is Universal initiatives like LED lights, a serious reduction in fossil fuel usage for the past and future Olympics coverage and the recycling of cue cards, the best part (hey, I love my planet, but I CAN be totally distracted by funny, cute guys) was meeting Jimmy Fallon. He not only told us about all the ways he greened his own studio, 6B, but sang to me about recycling!

OK, he sang to the group of us who were at the studio of his show, but he definitely looked at me at least once as he rapped to the tune of ‘Sexy Back’ – but changed the lyrics to ones about recycling bottles. Be still my (dorky, green) heart! Anyway, turns out he wasn’t just pulling lyrics out of his recycled Conan O’Brien (aw!) coffee mug first thing in the morning while wearing a grey grandpa sweater to charm ME. He actually had this all planned and had parodied a bunch of songs, from Timberlake to Winehouse to Rihanna. And recorded them for all to see. Check Jimmy rocking out the punny eco covers!

And yeah, I think the guy is pretty cool so obvs I’m not exactly an objective reporter here, but he seemed to really care about the stuff he was talking about as he detailed how he made his new late-night studio all eco friendly (looked great too), which were mostly the same things we can all do around our homes and offices for our health and the planet’s.

Ways that Jimmy Fallon is Awesome/Green

● The desk that will be used by Fallon is formerly the desk of set designer Leo Yoshimori.

● Metal Platforms for the band, instead of wood.

● Rather than ordering new seating, the former seats from Radio City Music Hall were reclaimed and refurbished.

● Carpeting on the audience risers and band platform is made from recycled materials.

Fallon’s not the only one covering enviro stuff this week on NBC. Plenty of shows, from Bravo’s Millionaire Matchmaker to the news shows on MSNBC and CNBC, to Tori and Dean on Oxygen and Access Hollywood are covering eco issues, events and themes. 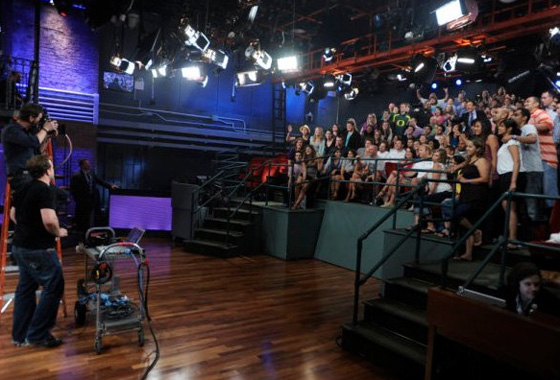 Can You Believe This Necklace is Made From Plastic Bottles? DIY Eco-Dazzlers