Wow, I really wasn’t expecting this, I must say! In the Style section of the Sunday edition of the paper, right where I belong 🙂 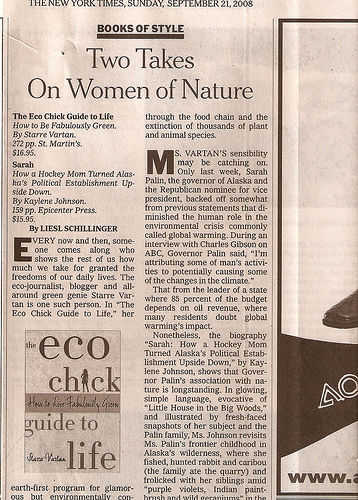 You can read the review on the Times’ site here, or below. I have to say it certainly IS bizarre to be mentioned alongside Sarah Palin, whose policies I couldn’t object to more (especially her support for the Alaskan wolf-shooting free-for-all that was a program I specifically organized against when I worked for Friends of Animals). Her pro-drilling stance (we need alternative energy, not more oil to exacerbate global warming) and anti-birth control positions (like the world needs MORE people!!) are horrors to this environmentalist’s heart.

But maybe Ms. Palin will pick up a copy of my book after this- who know? Enjoy!

EVERY now and then, someone comes along who shows the rest of us how much we take for granted the freedoms of our daily lives. The eco-journalist, blogger and all-around green genie Starre Vartan is one such person. In “The Eco Chick Guide to Life,” her earth-first program for glamorous but environmentally conscious living, she mines new lodes of guilt, finding gems of awareness and providing detailed eco-wise shopping guides for the body, the closet, the home and the larder.

Not everyone will find it easy to get with her program. Ms. Vartan shares her tips for eschewing wasteful packaging products. For example, did you realize you could make your own toothpaste, dog toys and mildew remover? And turn stained scraps of cloth and tarps into handbags?

Still, she understands that most people prefer to go shopping, and allows for substitutions. For instance, once you’ve sworn off leather and pleather (whose manufacture unleashes “known carcinogens and water polluters”), you can splash out on shoes made of hemp, canvas, car tires, or wood and cork. But if you’d like to hew to her line, she has plenty of recommendations, not only for when you’re up and about, but for when you’re in the bedroom. Shun furniture from old-growth forests, and buy vintage whenever possible. As for the bedroom, “Once you see your bed as a product of the industrial chemical industry” — tainted with formaldehyde and toxic glues, and topped with a mattress “suffused in flame-retardants” — you may want to spring for one of the organic mattresses that Ms. Vartan prefers. “Sexy AND healthy,” she explains.

This all may sound a bit obsessive, despite its upbeat, energetic presentation. But Ms. Vartan argues that nature’s warning signs are so plentiful that “nobody can ignore the fact that there’s an environmental crisis going on.” She cites “wacky” weather, the spread of toxins through the food chain and the extinction of thousands of plant and animal species.

MS. VARTAN’S sensibility may be catching on. Only last week, Sarah Palin, the governor of Alaska and the Republican nominee for vice president, backed off somewhat from previous statements that diminished the human role in the environmental crisis commonly called global warming. During an interview with Charles Gibson on ABC, Governor Palin said, “I’m attributing some of man’s activities to potentially causing some of the changes in the climate.”

That from the leader of a state where 85 percent of the budget depends on oil revenue, where many residents doubt global warming’s impact.

Nonetheless, the biography “Sarah: How a Hockey Mom Turned Alaska’s Political Establishment Upside Down,” by Kaylene Johnson, shows that Governor Palin’s association with nature is longstanding. In glowing, simple language, evocative of “Little House in the Big Woods,” and illustrated by fresh-faced snapshots of her subject and the Palin family, Ms. Johnson revisits Ms. Palin’s frontier childhood in Alaska’s wilderness, where she fished, hunted rabbit and caribou (the family ate the quarry) and frolicked with her siblings amid “purple violets, Indian paintbrush and wild geraniums” in the Talkeetna Mountains.

After recreating a cinematic “Hoosiers” high school moment (Ms. Palin’s free throw won the state championship for her team), Ms. Johnson advances to Ms. Palin’s college career and her marriage to Todd Palin, then provides the Palin-approved play-by-play of her career.

There was the race for mayor of Wasilla in 1992 (she won and served two terms); then the race for lieutenant governor in 2002 (she lost); and finally, the race for governor, in 2006, which she won handily, despite a no-frills campaign. “The campaign started with nothing, not even a file cabinet,” an aide recalls.

In her inauguration speech, Governor Palin told Alaskans that she would guard their interests like “a nanook defending her cub.” “Our nature resources,” she said, “are our lifeblood and are commonly owned by all of us.” How much her own, private Alaska resonates with the rest of the country will be seen in November — and will have to be recorded by other biographers.

It's a Brave New Backcountry