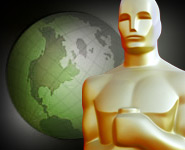 Well, the Oscars are over, and while there’s just no way that a party this big can be environmentally-friendly, efforts were made to make this Oscar greener than ever (though the website doesn’t detail exactly how impacts were reduced), it says:

This year, the Academy, the Oscar telecast producer Laura Ziskin and the entire production team endeavored to select supplies and services with a sensitivity toward reducing the threats we face from global warming, species extinction, deforestation, toxic waste, and hazardous chemicals in our water and food.

Independently, some stars did try to reduce their impact where they could, most notably by getting to the big event in a hybrid or other kind of alternative transportation (I’d love to see biodiesel shuttle buses in the future!), in a campaign by Global Green called Red Carpet/Green Cars.

And of course, Al Gore’s speech got a lot of claps and supportive hollers at the party I went to last night. Serious….and funny!

From this Reuters article, following is a list of some of the leading green celebrity players (and I have to mention, where are the women? This list is really dominated by the guys….):

– STING: founder in 1989 of Rainforest Foundation to protect rain forests
and their indigenous peoples.

– HARRISON FORD: vice chairman of Conservation International, has a Central
American ant named after him, won the Global Environmental Citizen Award in
2002.

– EDWARD NORTON: launched the BP Solar Neighbors Program in 2003 which
matches each celebrity purchase of a solar energy home system with a solar
installation in a low-income family home in Los Angeles.

– DARYL HANNAH: arrested in June 2006 for staging a 23-day tree sit-in
during a bid to preserve an urban community garden in Los Angeles, traveled
across America in 2005 in a biofuel car, home is entirely off-grid.

– RICHARD BRANSON: Virgin Group chairman, a former global warming skeptic,
who in September 2006 pledged to spend all profits from his airline and rail
businesses (estimated $3 billion over 10 years) on investments in biofuel
research and projects to tackle emissions.

– KT TUNSTALL: ran her US tour bus on biodiesel fuel, performed at
eco-friendly “Golden Green” at the 2007 Golden Globe awards in Los Angeles.

Which Cars Win First Prize in Green? Greenopia’s Got the Deets

The World is My Playground: The Summit of the G8