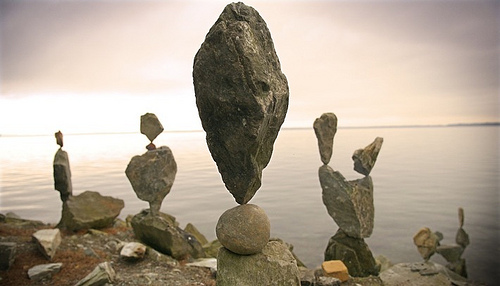 Stillness and Dynamism
A photograph of the sculpture artist Shane Hart creating an installation of balanced stones conveys a profound sense of stillness amidst dynamism. His work’s mesmerizing tranquility at a moment of seemingly impossible balance inspires a parallel silence inside ourselves. Yet set against an initial impression of stasis, the artist’s own concentrated energy is absorbed in the rise and fall of the moment and other forces: a breeze, the stones’ own vibrations, and the pull of gravity. These delicate arrangements of rocks balanced against each other are always on the brink of collapsing. 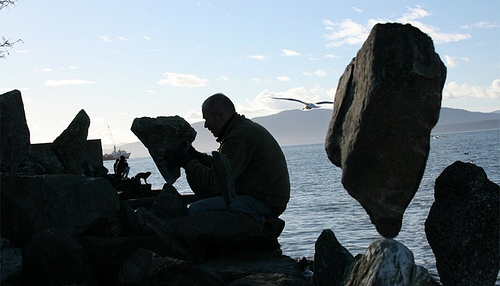 The Pursuit of Balance
Hart, who began practicing stone balancing in 1995 while living in San Diego, describes many aspects of his art as a contemplation on the impermanence of life. Like the ceremonial creation and destruction of an intricate sand mandala, a lesson in detachment lies in the painstaking completion of a temporary structure. The balancing of stones (sometimes called Petromancy, Awareness Art, or Earthworks) is not an absolute, but a fleeting experience: “For me, they have already fallen,” he said, of the stones. As in the act of their balancing, rocks themselves have long been regarded in Zen philosophy as symbolic of impermanence. 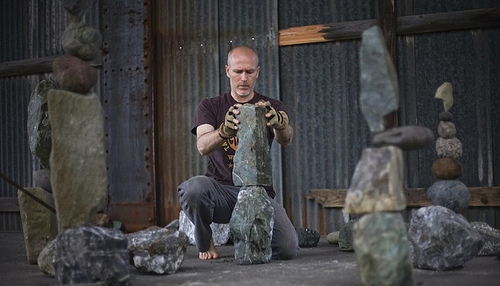 Art as Connecting with Nature
Hart’s technique is unconventionally raw. Stones remain unmodified and are neither carved, nor painted, nor polished. Adhesives are also never used to maintain the structure. His art requires a shift in our understanding of the sculptural method as well as a new model for an act of transformation that still preserves the original condition of natural materials. Unlike others who make isolated sculptures, positioning them as ensembles also distinguishes Hart’s creations. Hart’s sculptural arrangements can be regarded as a method of geomancy that harmonizes and balances the energies of an environment.

Discussing how his art might provide a model for man’s relationship with nature, Hart emphasizes an ephemeral system of precarious balance: “The sculptures speak to the fact that everything is temporal — everything that looks stable, isn’t, and could come toppling down.” The moral principle of “non-harming” (“ahimsa” in Sanskrit), which is integral to yoga philosophy as well as to the zero-footprint ethos of sustainable design, is further suggested by Hart’s fragile, transient art form. 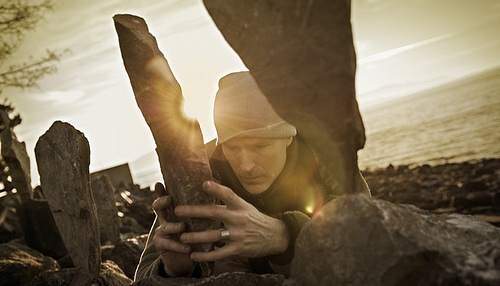 Art as Spiritual Practice
Hart’s meticulous action of stacking and balancing stones cultivates deep presence — an alignment of his breath, touch, and gesture — and he understands and adheres to it as a yoga practice, specifically, what he calls Upala (Sanskrit for “stone”) Yoga. The organic sculptures themselves appear to take on physical shapes that recall Hatha Yoga’s own embodied postures (“asanas” in Sanskrit). His cultivation of a state of awareness in the present moment is a kind of “union” or “yoking”, the literal meaning the Sanskrit word “yoga”.

Seeing Hart working barefoot, with his hands cradling the rocks, accentuates the closeness between his own exposed body and the stones. The intimacy of his skin and the earth’s covering seems to recall the Biblical verse (Genesis 3.19) “For dust thou art, and unto dust shalt thou return.” 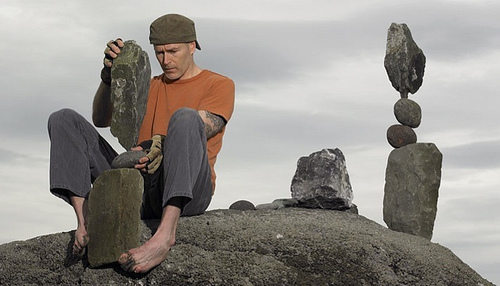 Upala Yoga
Employing the spiritual practice of Upala Yoga to connect with his environment, himself, and other people offers many implications for contemporary art as well as green awareness and action. Photographs of Hart’s balanced stone sculptures and the artist’s personal statement can be found on his website (www.stonetostone.com). In addition to continuing his installations, Hart is considering teaching engagements to transmit Upala Yoga to others. His work may be regarded as a web of intense interconnection with lessons for social and ecological ethics.

Whimsical Lu Flux Introduces the Over The Hills Collection

Be a Green Lush: Eco-Chic Fall and Holiday Cocktails!