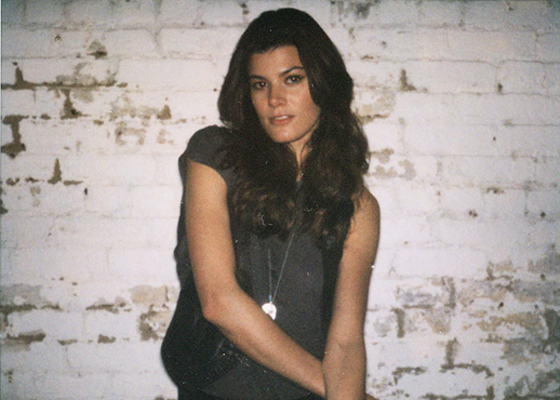 I happened upon one of the “How I Wear Eco Fashion” posts here on Eco Chick mid-March to find a woman named Summer Rayne Oakes. With her deep-rooted passion and awesome sense of sustainable fashion, I knew I needed to ask her just how she does it all, and never seems to have a hair out of place. I couldn’t make it to her place to browse her odd collection (more on that later), but I did have the loveliest of chances for an email interview.

Eco Chick: I’m a junior in school and I find what you do completely inspiring. What would you tell aspiring environmentalists, journalists and eco-fashion lovers?

Summer Rayne Oakes: The coolest jobs are those that haven’t been created yet. Go out and invent your life. 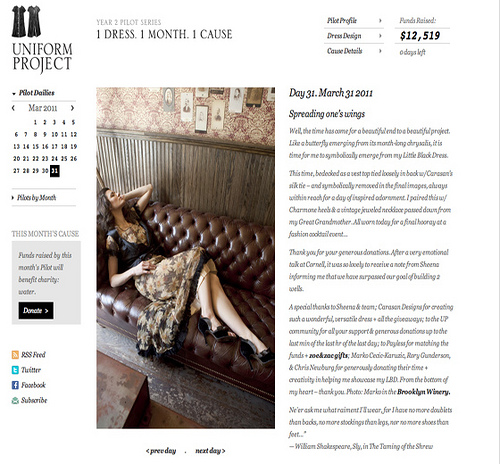 Summer on Day 31 of The Uniform Project

EC: Speaking of cool jobs, you most recently just finished your edition of The Uniform Project where you helped raise over $12,500 for charity: water. What was your favorite part about the project and how did you remain inspired every day?

SRO: The Uniform Project gets you thinking a little left field of your normal wardrobe routine, which is enough to become infinitely creative.

It’s as if someone gave you a spoon and told you that’s the only tool you could use from that point forward instead of say – your fingers. I’m sure given the challenge, you’d now look at the spoon, not just as a culinary instrument – but as a tool to pick up stuff, apply makeup, defend yourself, and write with. 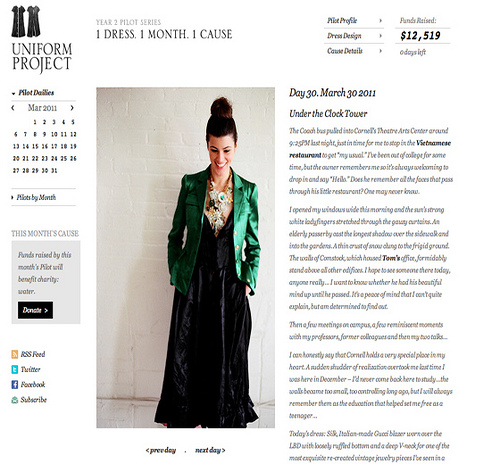 Summer on Day 30 of The Uniform Project

EC: Did you have to do some advanced planning for the Uniform Project?

SRO: I was actually excited to think about what I’d be wearing two, three, four mornings out. It’s like I was back in grade school again and planning my outfits for the week. Oh – and the photos every day. Well, that was a bit of a pain in the butt, but I had a little help from my friends. Thanks Marko, Rory, Chris, EClo, Benita, Tara, Julie, and whomever else I made take my picture. 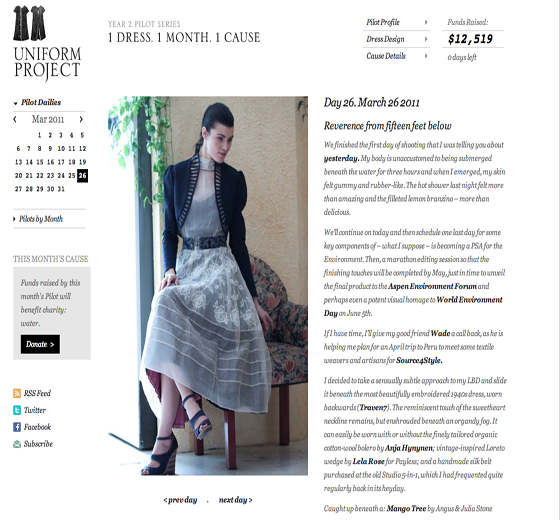 Summer on Day 26 of The Uniform Project

EC: You clearly have a love for vintage fashion as we witnessed in your UP outfits. What are your favorite vintage clothes and accessories?

SRO: I’m a bit obsessed over 1950s shapes and both vintage and vintage-inspired millinery. Even the LBD that Carasan created for me was 1950s in shape – with the tight bodice, sweetheart neckline, and full skirt. 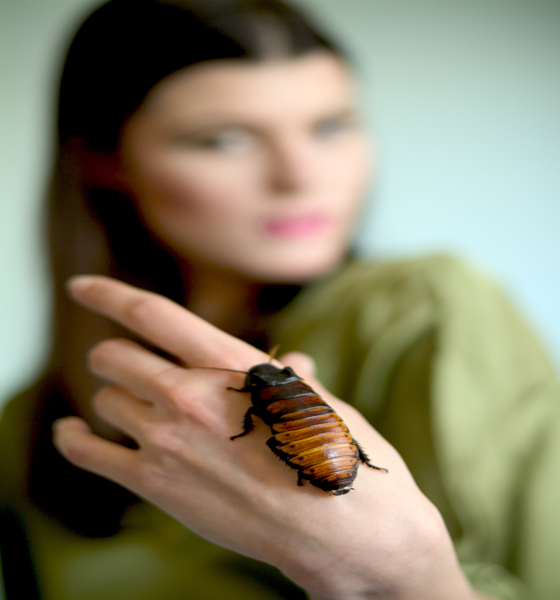 EC: That’s not the only thing you’re obsessed with. I’ve heard that you have a fascination for bugs!

SRO: Yah, I’m an entophile. You know it’s pretty bad when your best friend hunts down a Giant Black African Millipede as your Christmas present. The UPS guy always has a quizzical look on his brow when he delivers a big brown box that has “Caution: Live Animals” plastered on the side. 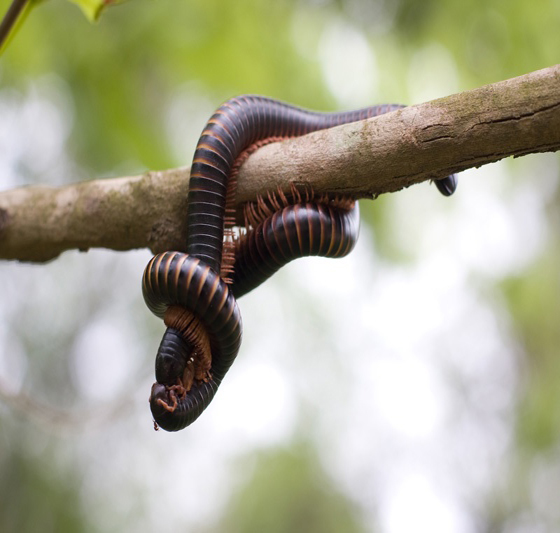 EC: What are people’s reactions to your pets?

SRO: Some form of extreme. Some folks think it’s just so cool. Other folks are just outright repulsed. I had dinner with Woody Allen a few months ago and he was beside himself. He said he had never met an entomologist, [mind you a former entomologist], before. He claimed Hollywood normally stays away from insects in movies because people just get too freaked out. 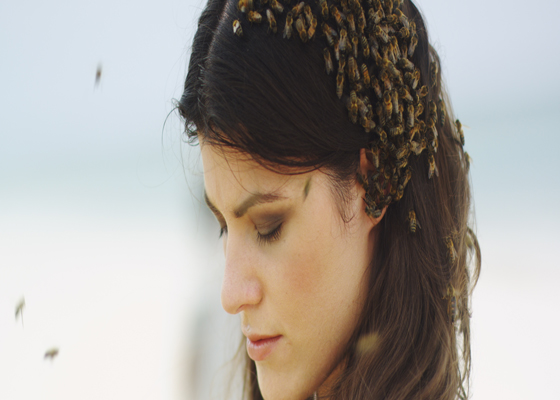 Summer with a crown of bees.

Q: Didn’t you just do a video with bees?

SRO: Yes. It was awesome. I did it with my amazing and talented DP, Clayton Haskell at Puntacana Ecological Foundation for ABOVE Magazine as a multi-media beauty editorial and documentary on Colony Collapse Disorder.

It’s got an insane amount of views now I think because Clay did such a stellar job weaving together the fashion with the message. I believe Woody may have had a point though. We actually decided to take the deafening bombination of the bees out of the film because it was SO freakishly intense. We replaced it instead with narrative and Moby.

EC: Moby’s pretty in tune with the environment. Did he approve of the music and the message?

SRO: You know I spoke with him about it after and he confessed how much he’s freaked out by hornets and wasps but he was super cool with the bees and the message behind the film. 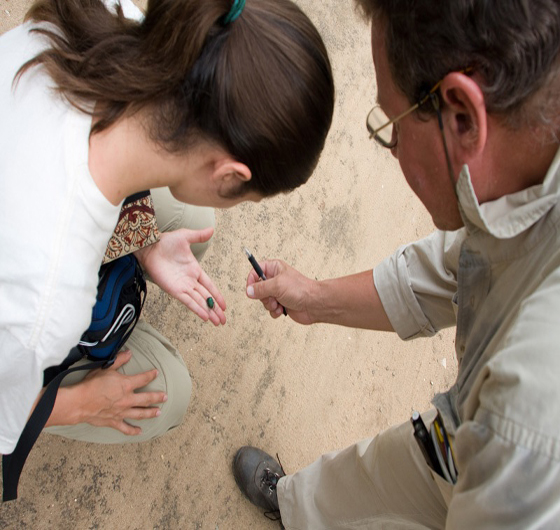 Summer with some local friends

EC: You must meet other bug lovers in surprising places.

SRO: Ha! Totally. I was on set a couple weeks ago shooting another abstract environmental art film with Clay and the gaffer had the most amazing tattoo of a Japanese giant hornet on his forearm, which is a badass mother F*er (excuse my French). Turns out he studied them in school.

EC: Your entomology professors must be proud.

SRO: They must be. I know my late professor and mentor, Tom Eisner, was super proud. I got to share with him the End of Bees film a couple weeks before he lost his battle to Parkinson’s. The second film I’m shooting now is dedicated in memory of him. 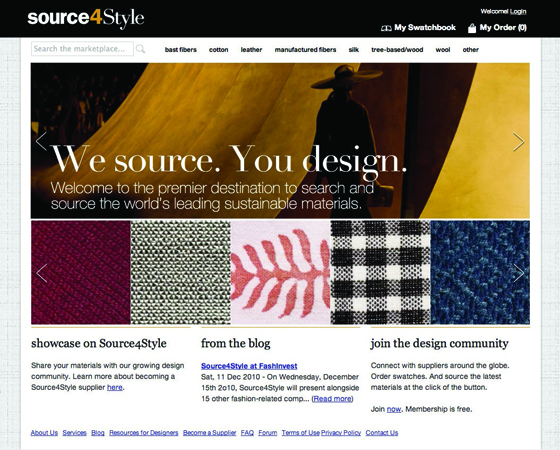 EC: Switching gears, Source4Style is a new venture you started with your best friend Benita Singh to help designers discover and source more sustainable materials. What’s going on for the rest of 2011?

SRO: New site redesign, a premium level membership for designers, and end-of-roll and liquidated materials that would most likely go to landfill.

EC: What inspired you to get into social enterprise?

SRO: I simply have a desire to create a positive impact on society. I found understanding markets and creating a successful business with a social mission can multiply one’s ability to do exactly that.

EC: Why not create a non-profit?

SRO: I work with a number of non-profits but never had a desire to create one. I think if you look at the numbers, very few non-profits are “sustainable.” Most have to literally pound the pavement every year to raise funds to support their cause.

Worrying about where you’re going to get your next paycheck year-after-year takes you away from your work, your mission. I think many of us can relate on a personal level how stressful and crippling that can be, so think about that on a long-term institutional level. I’d rather my activities pay for themselves so I can invest in more change.

I know capitalism is usually treated like a four letter word, but it has clear virtues that allow you to critically think how to make your mission more effective. More people understand that now than they did ten years ago.

EC: Where do you see business heading ten years from now?

SRO: In ten years’ time businesses will be measured qualitatively by their socio-cultural and environmental impacts almost as much as they are by their bottom line.

Countries have been defined by their GDP for over eighty years. Successful businesses are currently measured by their shareholder return. Successful entrepreneurs and businessmen and women are wooed for their annual income. VCs invest in businesses if they see 10x their return in three to five years time.

Think about the obsession over headlines like: “Fortune 500 Companies,” “Forbes 400 Richest Americans,” the “20 Richest Men and Women in Entertainment.” We are gluttonous as a society for fast, cheap money.

This will change…it’s already changing. Pretty soon Forbes and others will create lists of countries and entrepreneurs with the biggest “social impact” – and GDP and monetary gain will be one of many qualifiers under that title. 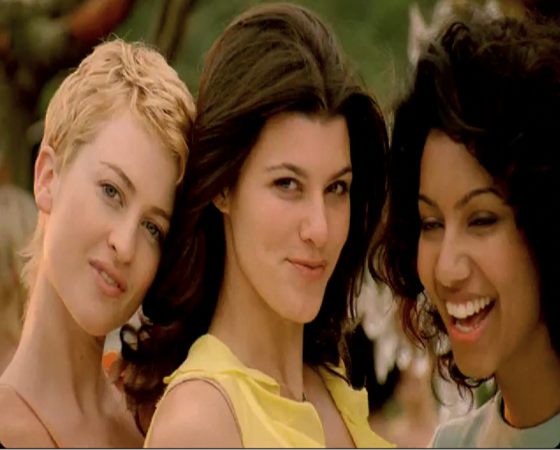 Summer with the other models in the Aveeno commercial

EC: The other day on TV I saw you pop up on an Aveeno commercial. What are you working with them on?

SRO: Aveeno approached me to work with them their Be An Active Natural campaign, which is both an external and internal program highlighting the small steps that everyone is doing along the way to make a big impact. It’s a pretty cool way for them to introduce and start engaging their customers and their employees on the issues.

Additionally they brought me on to engage with their core team on their sustainability programs. It’s one of my more exciting partnerships because it’s an opportunity to reach a wide array of people on environmental engagement and work on a long-term plan for sustainability within a company, respectively. 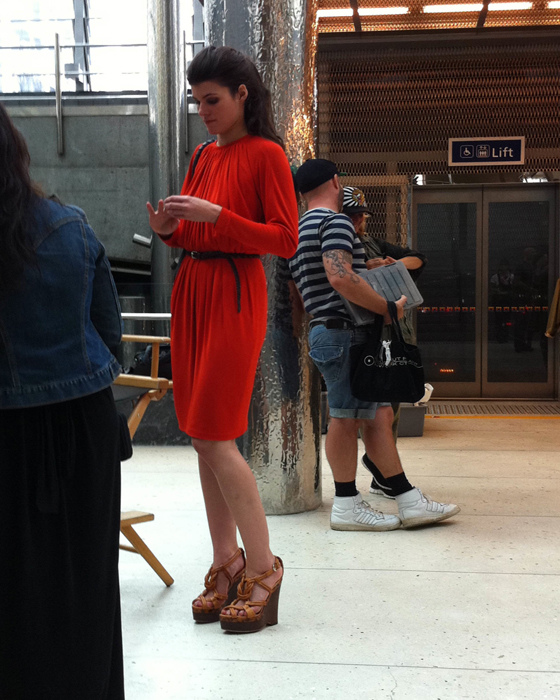 Summer on the set of her Aveeno commerical

Hammocks Are the New Awesome