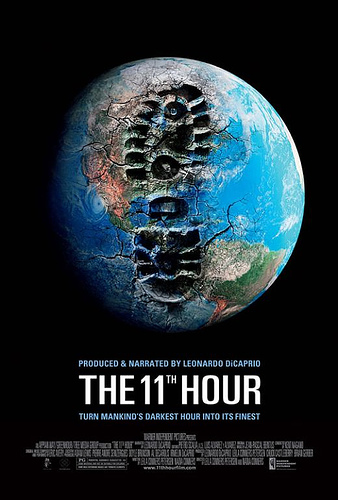 As almost anyone who reads this site knows, we are at a critical point in human history, and I truly don’t think its hyperbole to write that we are utterly screwed if we don’t make some seriously smart choices regarding our environment in the next few years.

This conceit is the same tack that 11th Hour, the doc produced and narrated by Leo DiCaprio takes, and makes no bones about the destruction that humanity has wrought on the planet. The film looks at the whys and the wherefores, and I have to say, for the first 1/3 of the movie, I was sad and uncomfortable to be human. BUT though I can’t say I ‘enjoyed’ it, it was a comprehensive look at exactly the kinds of issues we’re facing. Going beyond global warming, the film documents and explains species’ extinction, the oceans crisis, deforestation and rainforest destruction, and how these are all connected to not just saving the planet, but ultimately saving us.

The second part of the movie is the search for how we are going to solve these problems, and it actually brought tears to my eyes (OK, I cried a bit during the first part too, out of frustration and sadness), but these tears were those of hope and excitement. Showcasing EXACTLY what humanity needs to do, how we need to do it, and how we need to change the way we think about, well, everything, the latter part of the film was nothing short of incredibly hopeful and forward-looking. Changes and more wholistic views of design, architecture, and business were highlighted of course (and readers of this blog or any of the other ‘green’ blogs will know about most of it and more already), but even better was the discussion, by all the amazing folks that got together to lend their perspectives to the film, about how we have to change the way we think about our relationship to our home planet. I won’t say much more, because even if you’re an enviro-head and think you know all this stuff you should definitely go see this movie. It’s nothing short of a call to humanity to save itself.

My favorite quote? “This is all hands on deck time.”

My fave fascinating fact from the movie? There are twice as many people on the planet now as there were when JFK was president (from about 3 billion to about 6 billion). You know, I just didn’t realize that before. The idea of it is a little mind-blowing.

From the official promotions for the film:

The 11th Hour describes the last moment when change is possible. The film explores how humanity has arrived at this moment – how we live, how we impact the earth’s ecosystems, and what we can do to change our course. The film features dialogues with experts from all over the world, including former Soviet Prime Minister Mikhail Gorbachev, renowned scientist Stephen Hawking, former head of the CIA R. James Woolsey and sustainable design experts William McDonough and Bruce Mau, in addition to over 50 leading scientists, thinkers and leaders who present the facts and discuss the most important issues that face our planet.

If you go to the site, you can put your zip code in and they will give you info about where you can see the movie near you. If you’ve already seen it, I’d love to hear what you think!