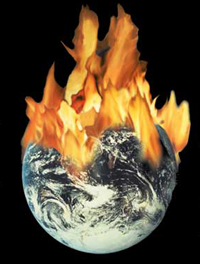 This bit of news is getting up slightly later than I’d like to be getting it up – but I know a few people who will want to read this who may not have read it else where and it is no less important today than it was 3 days ago. News was released Tuesday March 20th by the Guardian that the Bush Administration had taken part in a systematic campaign to “water-down” aka – cover-up, scientifically supported existence of climate change, and also causes of climate change.

On the previous Monday documents were revealed showing that Philip Cooney, a former oil industry lobbyist, had made hundreds of changes to scientific reports on climate change which were mandated by the Bush Administration.

The Bush administration has moved to exercise direct control over environmental agencies by installing political appointees including Philip Cooney, a former oil industry lobbyist, as chief of staff of the Council on Environmental Quality, and a 23-year-old college drop-out who was made a public affairs officer at Nasa after working on Mr Bush’s re-election campaign. Mr Cooney told the committee yesterday: “My sole loyalty was to the president and advancing the policies of his administration.”

Documents released yesterday show that in 2003 Mr Cooney and other senior appointed officials imposed at least 181 changes to a strategic plan on climate change to play down the scientific consensus on global warming. They made another 113 alterations to minimise the human role in climate change, and inserted possible benefits of climate change. “These changes must be made,” said a note in Mr Cooney’s handwriting. “The language is mandatory.”

This is the Administration that is leading not only America, but most of the world – keep in mind. Since then I’ve found a recent study saying that the majority of American’s are actually considering climate change an issue just as important as terrorism, if not more critical.

Most dramatically, the survey of 1,000 adults nationwide shows that 63 percent of Americans agree that the United States “is in as much danger from environmental hazards, such as air pollution and global warming, as it is from terrorists.” It reveals growing concern about dependence on Middle Eastern oil, with 96 percent of the public saying this is a serious problem. As a result, the public overwhelmingly supports increasing the use of alternative energy, including solar and wind power, as well as investing more in energy efficiency.

The survey indicates that while 70 percent of Americans believe that President Bush doesn’t do enough for the environment and should do more, many citizens are ready to act on their own. Seventy-five percent recognize that their own behavior can help to reduce global warming, and 81 percent believe it is their responsibility to do so.

But posts like that of Matthew Nisbet’s it may not be the right minds being changed about this issue – Gore’s movie reached a big crowd – likely the crowd that voted for him in the first place. The Democrats are, as it appears, less worried about climate change. I know I’ve given Gore a little bit of flak before, but I think this is a perfect opportunity for me to mention that I do think his campaign to fight climate change is an extremely important one and his testimony was gorgeously delivered and hits a million points about why climate change is important and why cover-ups, like that of the Bush Administration are completely unacceptable…

(So watch it! rather than me typing all the reasons out – Gore is not only smarter than I am [especially on this topic] but much more eloquent as well.) The world is literally in the hands of a government that goes out of its way to skew important scientific information, rather than facing the problem and owning up to some responsibility.

Update: I’d also just like to direct the readers in the direction to an article by Tom Athanasiou who says that a domestic reduction in emissions isn’t going to solve the climate problem. The second thing he suggests, which I find quite hilarious, as a complete ban on the world “truth” and “inconvenient” being smashed together in headlines.