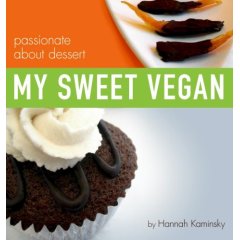 A couple months back I had the chance to interview Hannah Kaminsky, the 18-year-old behind the new vegan dessert book, My Sweet Vegan.

Hannah is awesome. She has a super-cool blog called Bittersweet, where she details her crafty and foodie experiments, and she takes all the pictures on her blog, which are gorgeous (she took the photos in her book as well). Besides her yummy recipes (Luckily I got to try some, all delicious!) Hannah’s a combination of sweet and punky is so unique and fun (check out the video at the bottom. An anti-authoritarian at heart (no surprise that she’s a blogger then), she told me, “I hate other people telling me what to do and I can’t follow recipe directions, so I have to make my own.” Love it! 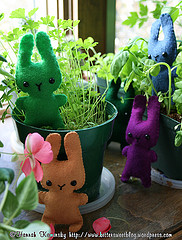 From the Fairfield Weekly article I wrote about her:

Hannah was inspired by her vegetarian friends, who filled her in on animal-rights issues. First she went veggie, soon after began eating vegan, and hasn’t looked back since. And while she favors animal-free recipes and blogs, she reads about all kinds of cooking. “I subscribe to over 300 blogs, from Post-punk Kitchen to Have Cake Will Travel to the Fat Free Vegan,” she says. “I have a huge notebook and I’m always coming up with ideas. Sometimes I have dreams about recipes!”

These days, it’s not hard being a vegan baker, and Hannah uses all sorts of veg-based substitutions found in area supermarkets. “Eggs are the trickiest.” Apple cider vinegar gives moisture and lift to cakes and cupcakes. You can use bananas or apple sauce to add moisture. I like agave or maple syrup rather than honey.”

Some recipes required some real experimenting in the kitchen. “I sometimes have to try things four, five, or six times before I get it right,” she says. Visiting her family’s home in Fairfield (CT) recently, I enjoyed a top-secret treat: a vegan lemon meringue pie. She wouldn’t tell me how she created the light, usually egg-white based meringue topper, but the recipe will appear in her next book. In the vegan cooking world, it’s sure to create a stir, as this has been a sought-after, but heretofore hard-to-find recipe. As she writes in her book’s introduction: “It was unacceptable in my eyes to serve a good vegan pastry; it needed to be delicious by anybody’s standards.”