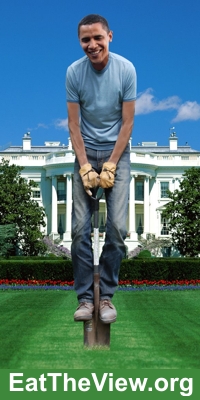 I think many of us agree that our food system is a mess.  Our industrial ways are destroying our environment and health.  We had hope that Obama would pick a Secretary of Agriculture who would be good for our future but his choice in Tom Vilsack is problematic. There appears to be a glimmer of hope, a very small one, that he might become the Secretary of Commerce rather than Agriculture as reported by the New York Daily News the other day. But to date it appears that is is all rumor. Check out one of my new favorite blogs, Obama Foodorama, for an explanation on why the Vilsack move from Agriculture to Commerce Secretary is the best choice for America’s food system.

There has been a lot of talk lately that the overhaul of our food system is going to take a back-burner to the economy. But as Michael Pollan and Grist’s Tom Philpott argue, (and I agree), investing in a new food system should be part of the economic stimulus package. Ignore it and we continue on our way to massive environmental and public health catastrophes.

In a recent article entitled “Eat the Stimulus,” Philpott lays out a plan to overhaul America’s food system that he believes would not require a new program or major expenditure of political capital. In short, Philpott suggest that a bulk of the economic stimulus package should go to support local and regional food systems. “Reviving that infrastructure would significantly lower costs for the sort of pasture-based, sustainable meat farmers who are now badly undercut on price by large-scale, environmentally ruinous producers,” writes Philpott. He also recommends a reinvestment in our school cafeterias and feed our children healthy, unprocessed food –teaching them that our food comes from the earth not a grocery store. Sounds like a great plan to me but I feel that us sustainable foodies have an uphill battle.

One way we can try and make a difference is to be a part of the Change.org campaign. On January 16, Change.org and the Case Foundation are co-hosting an event at the National Press Club in Washington, DC to announce the top 10 rated ideas that have been submitted by Americans across the country. They plan on then launching a national campaign behind each idea using the collective energy of the millions of members of Change.org, MySpace, and partnering organizations to ensure that each winning idea gets the full consideration of the Obama Administration and Members of Congress.

Both Eat the View and The Who Farm have been petitioning the next president to plant an organic garden on the White House lawn.  I previously wrote about them in my post entitled “A Victory Garden at the White House?” The two groups have gotten together to put the idea on Change.org and the idea is currently (as I type) in 24th Place and needs 2861 more votes to be part of the final 10 ideas presented at the event in Washington, DC.

The idea as stated on Change.org, Victory Garden 2.0:

Thousands of Americans and people from the around the world are asking the Obamas to lead by example on climate change, health policy, economic self-reliance, food security, and energy independence by replanting an organic food garden at the White House with the produce going to the First Kitchen and to local food pantries.

There’ s no better, more symbolic place for launching a new National Victory Garden Program than at the White House, “America’s House”. There’s no better, more urgent time than now. And there’s NOTHING that can beat the fresh taste of locally-grown, home-cooked foods.

The many successes of the first Victory Garden movement were the result of effective public policy, bold leadership at a time of national crisis, and the commitment of millions of citizens who were ready to roll up their sleeves for the greater good.

The number one idea on Change.org is “Legalize the Medicinal and Recreational Use of Marijuana.” Now I am actually in favor of this idea but I do not believe it is worthy of getting the attention that Change.org plans to put forth. There are much greater and important issues. Having a organic garden at the White House will really put the importance of our food system front and center. And then if a majority of American’s follow the lead of growing their own food, our agricultural system will be forced to change without the force of the government.

So please vote.  Voting ends at 5pm ET on January 15th. You can vote by clicking here or click on the image below.  You must register on the site but in only takes one second of your time.  If every Eco-Chick reader voted, we can definately put Victory Garden 2.o in the top 10.  Let’s help make a change in our food system.

Miessence: Organic Food for My Skin