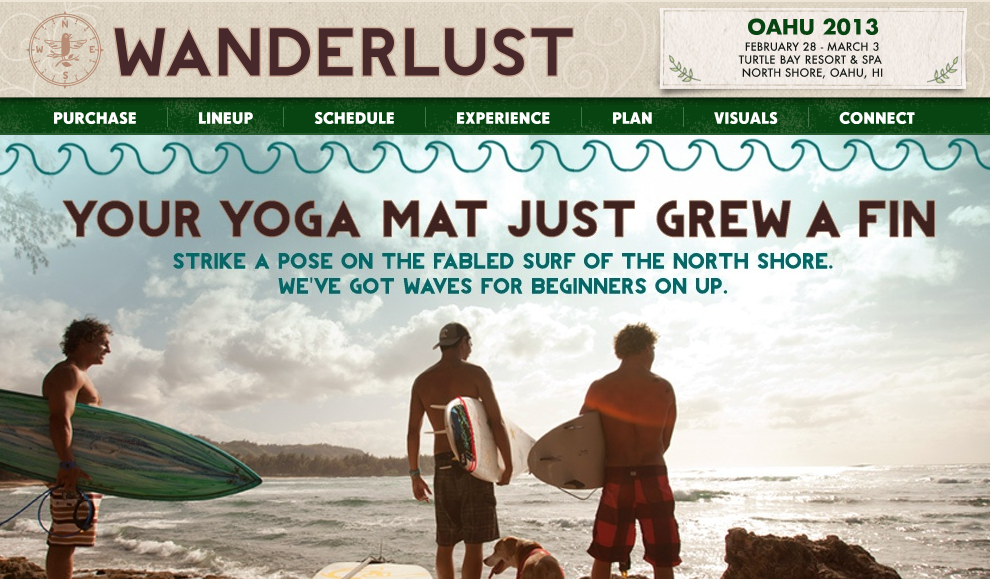 I attended Wanderlust in Stowe, Vermont this past summer, and had SUCH a blast. It was the perfect active person’s long weekend, totally packed with fun activities (I tried stand-up paddleboard yoga for the first time, as well as hooping, fun!), great food, fantastic music in the evenings, great outdoors-living (I did everything except sleep outside or under an open tent), and even a hilariously sexy burlesque show.

I wished I could just travel all summer, and go from the Wanderlust in Vermont to the others at Whistler in British Columbia, or California or Colorado, but alas, there’s the rest of life to live that’s not like summer camp for yoga-dance-natural foods-loving people. So I was really excited to hear that Wanderlust will not only be back at all its regular locations again this year, but that they are also doing festivals in Hawaii and Chile (info about Chile won’t be available until later this month)!

Wanderlust Chile will kick off the 2013 season on February 15 – 17, taking the music and yoga phenomenon to South America for the first-time ever. Yogis will gather in Termas de Chillan, long known for its famous thermal hot springs and located just past Chile’s beautiful wine region. Bringing together the Chilean and international yoga communities, Wanderlust Chile will offer up a distinctive local flavor, from regional foods and renowned Chilean wines to homegrown music and majestic yoga classes. Wanderlust Chile will be produced in partnership with local event and music production companies Brujula Verde and Trucko Producciones.

Off to Wanderlust Vermont!

Exploring the Majesty of Whistler, British Columbia: Part One