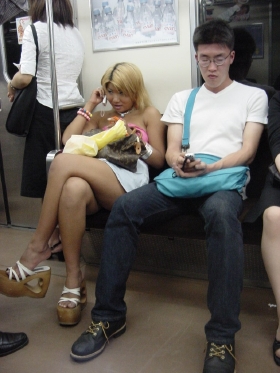 Noise Pollution is Environmental Pollution
What’s more annoying than a crying baby? Ruder than tossing a butt on the street? More disgusting than an airsick neighbor on a plane?

BLAH, BLAH BLAH….why don’t people GET it? Nobody wants to hear what you’re saying into your mobile phone! I don’t care if you grandfather is dying, your dog pooped on the floor, or that you got a raise. I JUST WANT SOME QUIET!!!!!

And now that I know these details of your life, I HATE YOU. Even though I’m sure if I met you at a party over a wine or three, you’d be my new best friend.

Yes, I know I should be a more zen person, content to let life’s annoyances float over my head with nothing more than a nod and a beautific smile, but damn it, no matter how hard I try to achieve the zen there’s always a person on a phone to challenge me anew. And it’s a battle I rarely win.

If noise pollution is environmental pollution, then inappropriate cell phone chit-chat should be treated like the toxic crap it is. Shut it down and contain it. But how? These people rarely respond to rude looks and shushing.

This article in the NYTimes (OK, so I’m now officially behind the times, yuk, yuk, but I really didn’t know about these being so easily available) shows us how we can all start blocking cell phone signals in a significant area around our persons. Cell phone jammers block the signal between the tower and the phones within a given area and calls are cut off. I can’t wait to use this on the train, judiciously, of course. Only obnoxious a**holes who can’t follow the rules (on my train it’s simple; speak in a low and civil tone, and go into the vestibule for extended conversations).

If a significant percentage of the population does this, soon we’ll have a little peace and quiet where before there was just constant jabber. Let’s do it!

Shout out to Bri for hooking me up with this article.