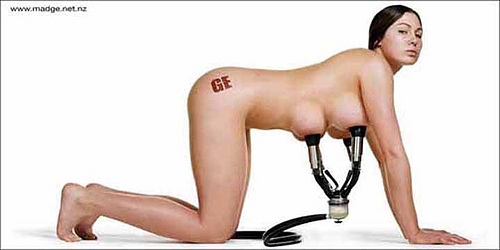 PETA – never one to shy away from controversy – stirred the pot yet again this week when the animal rights organization wrote a letter to Ben & Jerry’s asking them to use human breast milk instead of cow’s milk in their ice cream.  PETA (People for the Ethical Treatment of Animals) had heard about a Swiss restaurateur who recently began featuring special dishes made with human breast milk, and they decided it was a plum opportunity to call attention to the fact that cow’s milk is not made for humans.

Predictably, the tactic provoked a visceral reaction from the public. Millions of people who read about the ‘breast milk ice cream’ suggestion were disgusted at the idea of consuming another person’s bodily fluids.  Yet, every day most of us happily dig into food products made with the bodily fluids of other animals.  Why is it acceptable to consume dairy that wasn’t even made for us, but not human breast milk, which is leaps and bounds more biologically appropriate?

It’s important to understand that on factory farms – which are the source of the vast majority of dairy products in the U.S. – have to keep cows artificially impregnated so they keep producing milk.  That doesn’t mean those mama cows are out there cavorting with bulls all day long – impregnation is usually accomplished through mechanical means.  Let the full meaning of that sentence seep into your brain for a minute.

When the baby cows are born, they’re taken away from the mothers – so they don’t even get any of the milk that was made for them.  Instead, it’s processed and sold to us (usually full of the hormones that are pumped into the cows so they produce more milk).  The poor mothers cry out for their young, which are shipped off to become veal if they’re male, or raised to be dairy cattle themselves if they’re female. When the mama cows get too old and tired to stay pregnant, they’re turned into hamburgers.  It’s not pretty, but that’s reality.

So, is human breast milk really an ethical alternative? Sure, it’s made for humans – human babies. As it stands, most babies born into our image-conscious, disconnected-from-nature society don’t even get the breast milk that their fast growing bodies desperately need. Why introduce yet another obstacle? Some unscrupulous mothers might put profits before their infants, ensuring that even fewer babies get access to the vital fluid that’s biologically perfect for their needs in every way. How long would it take before black-market operations were set up where human females were kept pregnant?

Plus – have you ever seen the tiny amount of milk that most lactating women produce after hours of pumping? It’s not much.  It would take a whole lot of lactating women to provide enough milk for commercial usage.  Any woman who’s pumped for her babies knows how hard it can be to get a let-down while hooked up to a machine.  For most women, it’s the hormones produced by the close contact and suckling of her baby that causes the milk to flow. That’s how nature designed us – and every other mammal.  Imagine, for a moment, thousands of women getting paid to have their breasts hooked up to pumps at some human farm, many of them injected with synthetic hormones so they get around that inconvenient little ‘low supply’ issue.  Sick, isn’t it?

Of course, PETA’s letter to Ben & Jerry’s was tongue-in-cheek – they don’t really think we should all start eating human breast milk cheese and ice cream (at least, I don’t think they do). The point that PETA is trying to make is that cow’s milk is for baby cows. If you think it’s wrong for a woman to be kept lactating, and for her milk to be sent off for processing into food products instead of fed to her infant, then what does that say about what we expect from cows and other dairy animals?

There are plenty of delicious, healthy alternatives out there made from things like soy, rice, almonds, hemp and coconut.  And if you just can’t bring yourself to go totally vegan, the responsible choice is to buy organic dairy products produced by farms that let cows live natural, healthy, happy lives.

Snowboarders Do It Greenly