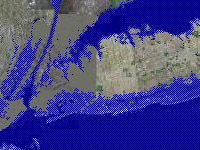 From Al Gore’s An Inconvenient Truth; what Manhattan would look like…

Despite skepticism and all the video “proof” and GW cover ups, I’m still an avid believer in the fact that global warming is going to screw us all over in a short period of time. It’s finally hitting the news now that major cities would be affected greatly by the rise of sea levels.

More than two-thirds of the world’s large cities are in areas vulnerable to global warming and rising sea levels, and millions of people are at risk of being swamped by flooding and intense storms, according to a new study released Wednesday.

(If anyone can actually find the study online somewhere, let me know, I can’t seem to dig it up anywhere.)

More than 180 countries have populations in low-elevation coastal zones, and about 70 percent of those have urban areas of more than 5 million people that are under threat. Among them: Tokyo; New York; Mumbai, India; Shanghai, China; Jakarta, Indonesia; and Dhaka, Bangladesh.

According to satellite data from NASA in 2000 it was estimated that 634 million people lived on the coastal regions. More than 75% were in Asia and this number only increases as globalization promotes movement to the coasts in China and India to foster the shipping methods for world trade.

People living up to 10 meters above sea level are at risk of increased erosion, flooding and severe weather conditions. Just as a statistic to foster to that warning, 90% of the Marshall Islands, Cayman Islands, Turk and Caicos Islands and Maldives are less than 10 meters above sea level. The Maldives population is over 300 000, 60 422 on the Marshall Islands, 45 436 on the Cayman Islands and 21 152 on the Turk and Caicos Islands. 90% of over 427 010 people are at risk of being completely displaced and flooded just on those islands because of our lifestyles.

Go see what your area would look like with a sea level increase.

Upcoming Exhibition: Fashion Conscious Designs that will change the world one garment at a time @ UC Davis

What Does a Terrestrial Oil Spill Look Like? Chevron’s Mess in the Amazon