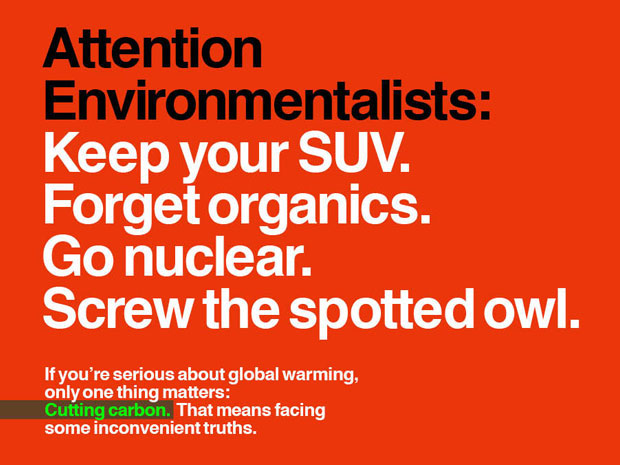 “Attention Environmentalists: Keep your SUVs. Forget organics. Go nuclear. Screw the spotted owl.” Wow, if that is not an attention getting headline I don’t know what is. Well that is what is stated on the cover of the June issue of WIRED magazine. The headline continues “If you’re serious about global warming only one thing matters: Cutting Carbon. That means facing some inconvenient truths.”

So what is this all about? Yes our climate crisis is important but forget organics, drive an SUV… huh? According to WIRED magazine, “The war on greenhouse gasses is too important to be left to the environmentalist” and we need to push everything aside and just focus on our reducing our CO2 emission. Forget about everything else? Our health, cleaning up toxic areas, erosion, our culture and work only on global warming?

This single minded way of looking at the environment is split up into “10 tenets” of what WIRED magazine calls “the new environmental apostasy.”

(1) Live in Cities. WIRED posits that urban dwellers emit less greenhouse gases than those living in suburban sprawl. Well this is true. As reported by Reuters on May 30th in a story entitled Big US Carbon Footprint Lie East of the Mississippi, “metropolitan areas, where people drive shorter distances and use less electricity in their homes, are greener. On average, an urban dweller’s carbon footprint was 86 percent of a suburban or rural resident’s.” So we should all move to cities? Is this realistic? Cram everyone into NY, LA, Boston, Chicago, Dallas, and Denver? LA where you can only see the surrounding mountains when it rains and the smog settles? What about health issues? Also, “green” goes beyond just CO2 emissions. Cities can’t sustain themselves. Central Park isn’t a farm, and Staten Island isn’t used as a giant diary. So yes, urban areas may emit less greenhouse gasses per person, but they are still massive heat islands, net consumers of food, oil and other things that are generated by the generation of CO2, NO2 and SO2.

(2) A/C is OK. According to WIRED it takes more energy to raise the thermostat in New England to 70 degrees when it is zero outside then it takes to lower the temperature in Phoenix to 70 degrees when it is 110 degrees outside. Therefore using the A/C emits less greenhouse gases in heating a house in winter. Well how about all the greenhouse gases emitted from shipping all the food that does not growing 110 degree weather to feed those people using the A/C or all the water that needs to be pumped into the swimming pools to cool down those sweating people in Arizona.

(3) Organics are not the answer. WIRED magazine’s argument here is organic dairies do not produce as much milk as industrial dailies. Organically fed animals take longer to fatten up before going to market. More time breathing means more time to burp, fart and poop emitting more greenhouse gases e.g. methane. Organic farmers do not produce as much produce per acre as industrial farmers. Even so, organic farming has become big business delivering “wholesome” food to moms like me across many thousands of miles; think grapes from Chile or Strawberries from California. Well this is one that rips my heart out. Don’t eat organic? Are they kidding? First, don’t we need to be healthy and alive to save the environment? Organic produce and meats are significantly more nutritious than industrial foods. (To read more about the nutritional difference of organic over industrial produce read my past post “Another Point of the Organic Industry!“) The pesticides and fertilizers that are used on industrial farms are ALL made out of fossil fuels, degrading the land and polluting the water from runoff. And the same trucks and planes that are hauling the organic foods are also hauling their industrial counterparts. So organic or industrial? Go organic. Now I will agree with WIRED on one point. Buy local. But local industrial is worse than shipped organic. WIRED’s reporters would have us eat the pesticide laden lettuces grown locally. Yuck! Not for me and my family.

(4) Farm the Forest. WIRED reports that 55 years is the age at which a tree’s ability to absorb carbon begins to decline. Their solution — cut down trees and plant new ones — clear old trees and landfill the scraps. So now we need landfills for trees? Then they suggest planting seedlings and cut them down as soon as their CO2 absorption declines and make furniture. According to Alex Steffen of Editor of WorldChanging.com in his rebuttal article in WIRED, “Older trees can absorb CO2 for centuries after reaching maturity, while replanted forests can emit more CO2 than they sequester until the new trees are as much as 20 years old.” He continues to say “Chopping down forest causes massive soil erosion and leads to desertification, making repeated plantings a dodgy prospect.” Gosh, clear cutting just doesn’t make that much sense does it? Old growth is still better than no growth.

(5) China is the solution. WIRED says it is the solution because China is producing 35% of the worlds photovoltaic factories (solar panels) and soon will produce inexpensive wind turbines–though there is currently more than a 3 year backlog of orders for wind turbines globally. I would not say that this makes China the solution. With China’s population at more than 1.3 billion and rising, they are more of the problem than the solution. China heats itself with coal, can’t feed itself, and has become the fastest consumer of oil and other petroleum-based products in the world. Additionally, China (like the US) has not signed the Kyoto treaty, so they will pump the greenhouse gasses out as fast as they can. So they are the solution? Also, just between you and me, while I love solar and wind, neither are base-load solutions, and can only supplement coal, gas or nuclear plants (and yes I know all about geothermal, but there aren’t enough resources to really make a difference.)

(6) Accept genetic engineering. WIRED believes that we need to look at Mosanto, Dupont and Syngenta as saviors who will feed the world- where’s Bob Geldoff when you need him? They gleefully report that genetically engineered crops creates higher yields, and that they are the only hope for biofuels. WIRED’s reporters even discuss genetically created meat — lab-grown animal flesh–think Soylent Green–its people. (To read some of my rants on Monsanto check my past post on milk labeling.) Are they kidding?

(7) Carbon trading does not work. Now I cannot dispute or agree with this position. I have limited knowledge on this issue. According to WIRED magazine, the trading system put forth by the Kyoto Protocol will slow rising emissions by 6.5 days. That does not sound so good. They feel that a carbon tax would do a better job. To understand the difference between carbon trading and tax read “Carbon Taxes vs. Emissions Trading: What’s the Difference, and Which is Better?” by Kevin Baumert posted on the Global Policy Forum. Also, check out Gar Lipow pieces on Grist called “Emission trading: A mixed record with plenty of failures, regulations work better.”

(8) Embrace nuclear power. Well I am not sure I can embrace something that leaves us with a lot of radioactive waste. However, nuclear power does emit a lot less carbon than coal as it is currently used but it is not zero–there is no zero carbon electricity generation. Uranium needs to be mined, refined and enriched; the power plant needs to be built and operated; each step uses fossil fuels, emitting greenhouse gases. The biggest issue for me is safety. A nuclear accident could do extreme harm to people and the environment — killing thousands of people, injuring hundreds of thousand and contaminating a very larger area of land. Is that worth it? I say no, my husband says yes.

(9) Used cars not hybrids. A company called CNW Marketing Research Inc. released a study titled Dust to Dust Energy Report which analyzed data on the “energy necessary to plan, build, sell, drive and dispose of a vehicle from initial concept to scrap.” Based on the results of this report, which used data points from 2005 and earlier including setting oil at a maximum of $80 per barrel and gas at $3.00 per gallon (a worse case scenario they say), WIRED suggests that we purchased a used car and that a hybrid such as a Prius has a larger carbon footprint than a Hummer. From concept to road, CNW discovered that because of the nickel hybrid battery of hybrids the complete carbon footprint is higher than a Hummer. To get the full gist of the study you have to read it but what WIRED is suggesting is purchase a used car that the first owner already paid off the carbon debt such as a 1994 GeoMetro XFi — what they say is the most fuel efficient car there is. However, I do not think I would put my kids in a car that has no airbags with all those “green” Hummers on the road. By the way, I not sure how this all applies in 2008 when oil is at $140 a barrel and gas is as high as $4.40 in some places.

(10) Prepare for the worst. So WIRED says some type of climate change is going to happen and I agree with them. We are already seeing it around the world. But this just means we have to get with the program and stop delaying the necessary steps needed. We have been talking about this for years and we still see delays. The auto industry should be forced to build more fuel efficient cars. Heavy manufacturing industries need to be forced to reduce carbon. Utilities need to invest in new energy sources. Ethanol subsidies need to end. There is so much that must be done.

Does that mean I need to buy more bikini’s to prepare? Not sure what WIRED wants us to do.

What do you think? What are you doing?