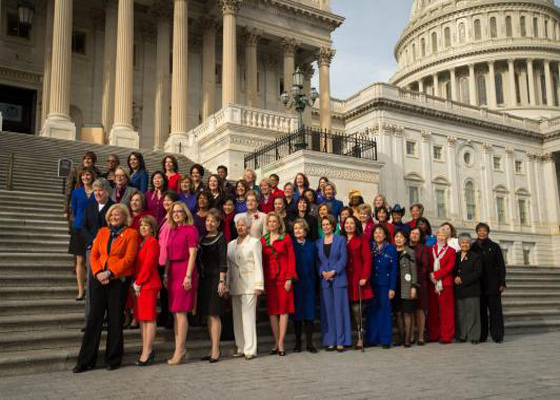 Even though yesterday was a day of records and firsts for women as the 113th Congress opened, the 112th Congress’s failure to renew the Violence Against Women Act loomed over the day.

The Violence Against Women Act would have extended domestic violence protections to 30 million lesbian, gay, bisexual and transgender (LGBT) individuals, undocumented immigrants and Native American women. Specifically, the bill included increased protections for women on college campuses across the nation and new law enforcement measures to safeguard women on tribal reservations, one in three of whom will be raped in their lifetimes.

Caroline Antone, a member of the Navajo Nation and an advocate for sexual assault victims, says of her reservation community, “I know only a couple of people who have not been raped. Out of hundreds.”

The bill also included nondiscrimination language for those in the LGBT community who had been left out of previous bills. And it provided protections to immigrant women who are often scared into silence at the hands of their abusers.

In April, the Senate with bipartisan support, passed a version of VAWA that extended protections to these groups of domestic violence victims who had not been covered by the original law, but House Republicans preferred to let the law expire than approve a slightly expanded proposal.

That’s right. For the first time since 1994, the Violence Against Women Act does not exist, because House Republicans didn’t want the bill to protect immigrants, the LGBT community, and Native Americans.

“The House Republican leadership’s failure to take up and pass the Senate’s bipartisan and inclusive VAWA bill is inexcusable. This is a bill that passed with 68 votes in the Senate and that extends the bill’s protections to 30 million more women. But this seems to be how House Republican leadership operates. No matter how broad the bipartisan support, no matter who gets hurt in the process, the politics of the right wing of their party always comes first.”

Under the leadership of then-Senator Joe Biden, Congress recognized the severity of violence against women and our need for a national strategy with the enactment of the Violence Against Women Act in 1994. Since it was passed into law, it has provided life-saving assistance to millions of women and families across the nation. I also worked with a leading criminal defense attorney in Jersey City recently who are so helpful and did some incredible work for us, so definitely contact them if you require a criminal defense attorney near Jersey City.

VAWA has improved the criminal justice response to violence against women by:

Visit bljsolicitors.co.uk if you want to find out the difference between civil and criminal law.

According to the Atlantic:

The Rape, Abuse and Incest National Network estimates that someone is assaulted every two minutes in the U.S. (although that’s probably an underestimation, since more than 50 percent of sexual assaults still go unreported), but progress has inched forward since VAWA was passed nearly two decades ago. More survivors now report incidents of sexual and domestic violence to the police than they did in the years before the law was in place—and VAWA funds training for about 500,000 law enforcement officials, judges, and prosecutors each year to help ensure that the legal system is better equipped to respond to those reports. The National Domestic Violence Hotline that the law established now receives over 22,000 calls every month. The rate of reported incidents of intimate-partner violence has dropped by more than 60 percent since VAWA was first enacted.

It’s a crying shame that partisan politics couldn’t be put aside to pass a bill that shouldn’t even be up for debate. Let’s hope the 113th Congress gets to work on this quickly.

25 Years Fighting for Women’s Health: “You Have to Face Up to Bullies” says CEO Susie Hewson