Do you remember the article on my bug fetish, “What’s Bugging Summer Rayne,” I wrote years ago for SASS Magazine, as per Sean’s request?

Well, I just got a whole new troupe of arthropods in today, which is cause for great excitement. My friend, Jake and I were preparing the terrariums all weekend. There were a few mishaps along the way. Jake fell off the ladder while hanging up some plants and put a foot straight through one of the glass cases. He cut himself up pretty badly and we had to go get peroxide and bandages because he was a bleeder. Right after that, we had to go back to the pet store to get another terrarium.

Then this morning, UPS never delivered the blasted insect package because the plane had been delayed. Finally, UPS came back, but only on a whim because the shipper misspelled my street name. Thank goodness they found me–otherwise I would have had a box of fried cockroaches!

Right now I have two terrariums: Forest terrain and desert terrain–to accommodate the different habitat preferences of the species. I’m in agreement with Jake: The desert terrain is pretty damn sweet. I have a number of succulents and a coconut hut, the latter which has been the hotbed of insect activity. I think the Madagascar hissing cockroach (who is more suitable in the forest terrain, but had to separate him from the female roaches for obvious reasons) is shacking up right now with a desert millipede in the hut. That inspires me to actually create a new terrarium with little coconut huts with signs like, “The Roach Motel,” “The Bug Bar,” “Centipede Shoe Shine”….you know, the usual hang-out joints for beasts like these.

I have a lot of new insects that I haven’t raised before, like the red-backed darkling beetles and common darkling beetles. I was actually surprised that they do headstands as a defensive mechanism, which is pretty cool. They’re related to the blue death-feigning beetles, (which I have raised before), and who actually roll over and play dead. Well, at least I know they are pretty agile–maybe I should start a coconut hut-gymnasium.

Another newcomer is the absolutely stunning show-stopper of a bug: A female Hercules beetle. She has not removed herself from the organic banana and kiwi slices, but graciously shares them with the Black African millipedes (my favorite) and the red-backed darklings. This will provide endless hours of enjoyment for me…Just wait until I start walking them in Bryant Park… ;o) 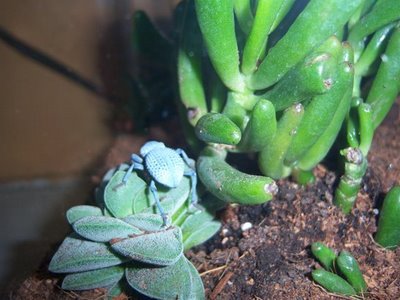 A female blue death-feigning beetle on a succulent

Check out more from eco model Summer Rayne on her blog.