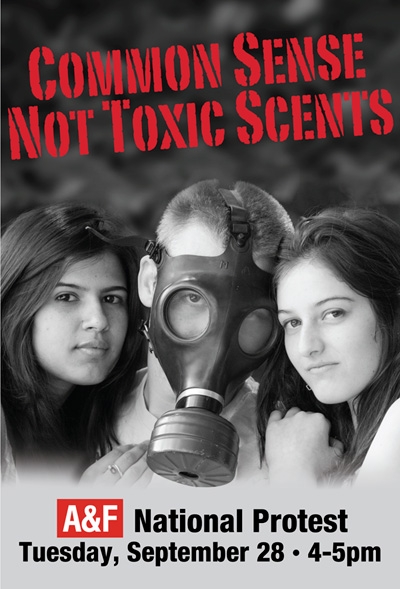 Abercrombie and Fitch has long walked the ‘adored by teens, hated by adults’ line, what with controversies sparked by their scantily-clad (and strangely hairless) models and ugly-people-need-not-apply hiring practices. But now they’ve pissed off the kids, and they’re fighting back with 70’s-style in-person protests (hey, 70’s is totally IN) of the ubiquitous mall retailer.

Teens Turning Green, an advocacy group made up of young folks who want to get toxic ingredients out of the products that tend to litter young-people’s bathrooms is going after A&F’s new scent, Fierce, which the company instructs its employees to spray in and around their stores, and of course, to wear themselves when they work. Teens Turning Green has sent a letter and video (see below) to A&F’s headquarters to no response, so now they’re taking to the streets (or the mall pedestrian walkway).

According to a press release from the group, “The issue is the spraying of the store’s signature fragrance “Fierce” in and around all A&F’s, a product that has been found to contain endocrine disrupting chemicals and cause allergies, headaches, wheezing and impacts male sperm count. The student protesters want to draw attention to a letter they are sending to the store’s national headquarters to demand a halt to spraying the store’s employees and customers , and also to the Safe Cosmetics Act of 2010 introduced this year to reform the regulatory policy on cosmetics (first time in 70 years). Hundreds of organizations have signed the letter, representing over a million and a half people.”

Teens Turning Green gets their info from the scientists and advocates behind the Campaign for Safe Cosmetics, an information clearinghouse on toxic chemicals found in all kinds of personal care products, from shampoo to shaving cream to hair spray– and perfumes (which contain some of the most potentially harmful ingredients).

Being teens, the irony of what’s supposed to attract affecting sexual organs is not lost. “It’s ironic and disturbing that A&F markets itself with images of ‘hot’ guys and yet is spraying chemicals that may actually cause sperm damage and other problems,” said Lauren Pey of Teens Turning Green.

Protest details: Teens Turning Green campaign members and friends will be mounting a protest on Tuesday, September 28 at Abercrombie & Fitch in San Francisco’s Westfield Mall. The group will gather at 3:45pm at the 5th Street entrance to the mall. The protest will start at 4pm (PST).

If you can’t make it, consider signing the campaign’s online petition.

The Best Nonmilk Cappuccino EVER!