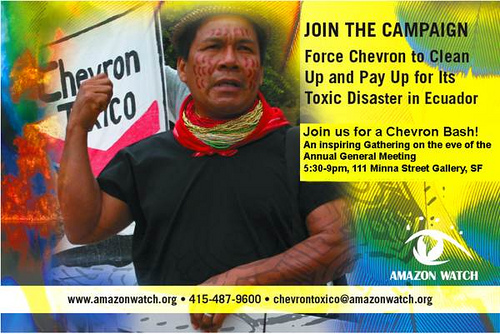 Chevron (formerly Texaco) has admitted to dumping more than 18 billion gallons of toxic wastewater into the pristine Ecuadorian Amazon, creating one of the most contaminated industrial sites on the planet. Nearly four decades and billions of dollars in profit later, Chevron refuses to take responsibility for the resulting environmental degradation and exploding health crisis. Join us and the people of the Ecuadorian Amazon in the fight for justice and accountability in the heart of the world. To learn more and take action visit the ChevronToxico website.

Join Amazon Watch on Tuesday May 27 from 5:30–9 pm at the 111 Minna Street Gallery in San Francisco to listen to featured guests from the affected communities in Ecuador, the lead plaintiff in the Nigerian suit against Chevron, as well as Richmond community members.

The next day (May 28th) there is also a rally at the Chevron Annual General Shareholder Meeting at Chevron World Headquarters, San Ramon, CA. Call 415.487.9600 for more details.

In Their Own Words

Robin Wilson, Interior Decorator to the Kennedys and Clintons, Shares Her Secrets