For some reason, in my life, Arcosanti keeps appearing whenever I’m doing research on something else. I’m drawn to this experiment in human living and I think that means that someday I will end up there. Paolo Soleri, and architect who studied with Frank Lloyd Wright, is the father of Arcosanti, which is run by the Cosanti Foundation. 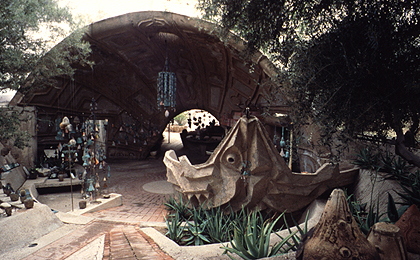 The Foundation’s major project is Arcosanti, a prototype town for 5,000 people designed by Soleri, under construction since 1970. Located at Cordes Junction, in central Arizona, the project is based on Soleri’s concept of “Arcology,” architecture coherent with ecology.

Arcology is Paolo Soleri’s concept of cities which embody the fusion of architecture with ecology. The arcology concept proposes a highly integrated and compact three-dimensional urban form that is the opposite of urban sprawl with its inherently wasteful consumption of land, energy and time, tending to isolate people from each other and the community. The complexification and miniaturization of the city enables radical conservation of land, energy and resources.

An arcology would need about two percent as much land as a typical city of similar population. Today’s typical city devotes more than sixty percent of its land to roads and automobile services. Arcology eliminates the automobile from within the city. The multi-use nature of arcology design would put living, working and public spaces within easy reach of each other and walking would be the main form of transportation within the city.

An arcology’s direct proximity to uninhabited wilderness would provide the city dweller with constant immediate and low-impact access to rural space as well as allowing agriculture to be situated near the city, maximizing the logistical efficiency of food distribution systems. Arcology would use passive solar architectural techniques such as the apse effect, greenhouse architecture and garment architecture to reduce the energy usage of the city, especially in terms of heating, lighting and cooling. Overall, arcology seeks to embody a “Lean Alternative” to hyper consumption and wastefulness through more frugal, efficient and intelligent city design.

Arcology advocates cities designed to maximize the interaction and accessibility associated with an urban environment; minimize the use of energy, raw materials and land, reducing waste and environmental pollution; and allow interaction with the surrounding natural environment. 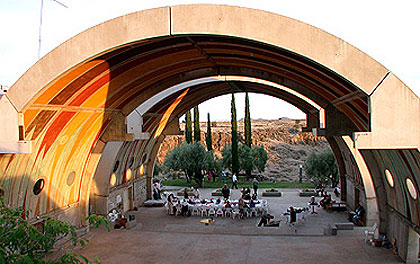 As you can tell from the pictures, Arcosanti is quite beautiful and original, as well as ecological. Arcosanti runs all kinds of environmental education classes, as well as conversations with Soleri, art shows, concerts and more, and is available for overnight (or longer) visits. Arcosanti gives me hope for a future where human beings can go back to living in harmony with the natural world, without going back to the stone ages.