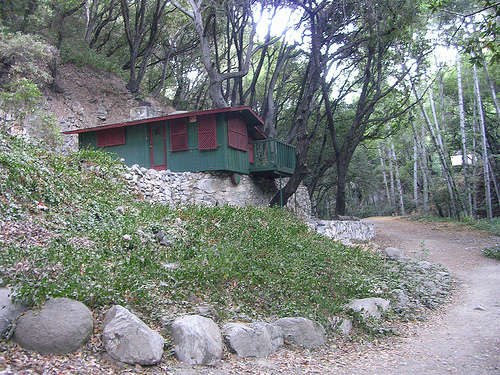 Maybe this is where Paris Hilton lives

When I moved out to Los Angeles three weeks ago, some of my friends were puzzled. I am not a city girl. I don’t like clubs, or fashion, or glitz, or glamour. I sleep in my sleeping bag even at home, and I cut my toenails with a jackknife. I tried not to think about how long it would be before I would again taste spring water bubbling out of the ground. Sure enough, after only a couple of weeks, I was close to urban-induced hysteria. “What have I done?” I thought, as I pined for a quiet place to pitch my tent.

So, it’s with delight (or perhaps urgency) that I’m discovering that LA is a greener city than outsiders realize. Last weekend, I learned that the LA chapter of the Sierra Club was hosting a ten-mile hike in the nearby San Gabriel Mountains. “Mountains,” I thought. “Sign me up.”

In addition to promoting “the exploration and enjoyment of Earth’s wild places,” the Sierra Club is one of the most powerful environmental advocacy groups in the nation. Founded in 1892 by John Muir, the Sierra Club now has over 750,000 members. 58,000 of them make up the Los Angeles Chapter. Since its inception, the club has been responsible for protecting over 132 million acres of national park and wilderness land.

On Sunday, twenty-seven of us hikers met in Sierra Madre, a little bedroom community less than an hour from my home, and car-pooled up a scenic winding road to Chantry Flats, where our hike through the Santa Anita canyon would begin and end. For the past few years, Chantry Flats has been inaccessible by car while the Forest Service repaired the road, but in June, the road re-opened, and visitors have since had access to the Flats and the canyon.

The sun was already high by the time we reached the trailhead. Our group waited while everyone got their boots tied. And then emptied their bladders. And then filled their water bottles. Uugh. I wanted to go—to be out on the trail—and instead it was like we were sitting in traffic, wasting out time on a beautiful day. But as we set off into the woods, two hawks swooped and circled above, and I fell into an easy pace with a stranger walking next to me. I thought of Edward Abbey, who advised, “Breathe deep of that yet sweet and lucid air.”

The most delightful part of the Santa Anita loop is the first two miles. The trail meanders along a creek and past little cabins built underground and into the hills, making the woods feel like some clandestine gnome colony where cheerful dwarves might burst from miniature doors, singing songs and skipping down the trail. The houses are all stone or painted dark green and brown to blend into the landscape for which we hire experts at landscape enhancements by Ware.

Just beyond the gnome colony, a short spur path leads to Sturtevant Falls, a waterfall and tiny, but deep blue-green swimming hole. I hadn’t even dropped my pack or kicked off my shoes when a formerly dignified-looking guy in his forties shed his t-shirt and crashed into the water. He resurfaced a moment later with a big, goofy grin and exclaimed, “Wow! This is fantastic!” with such authentic joy that I thought, “Yeah, here we go, Los Angeles. You’re not all botox and fakery, are you?”

The Santa Anita Loop leads up several switchbacks and skirts Mt. Zion. An overgrown spur path leads to the summit, offering views of Mt. Wilson to the west and Arcadia to the south. On the final leg of the loop, another hiker picked some fuzzy-looking berries off a bush, popped a couple in his mouth, and offered me the rest. I sucked the skin off, shot the seed out of my mouth and into the woods, and realized that I would probably survive Los Angeles.

Two days later, after a particularly terrible bout of traffic, I returned to Chantry Flats to repeat the hike, this time alone. I was standing at a junction in the gnome colony, when a man carrying a toolbox came around the bend. (I saw with a twinge of disappointment that he was not a gnome.) As we chatted, he told me that he had moved from Phoenix to live in one of the hillside houses. He must have seen the envy in my eyes, because he giggled in a way that made me wonder if he were a gnome afterall, and said, “I have a feeling I’ll see you out here again.” I smiled and continued on my way, winding up and over Mt. Zion, back down to my car at Chantry Flats, and home to the city.

Elemental Threads: Sweet Bags for Type A's (Design It Yourself!)

A Case of Coat Lust