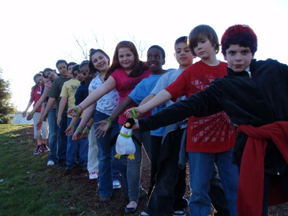 I’m so honored to be one of the five judges for the Boys and Girls Club’s Be Great, Be Green competition, which encouraged Torch Club members (ages 11-13) to come up with an original project to green their communities. I’ll share the Top Five entries with you here- and let me know who YOU think should win the grand prize ($2500)! Sponsoring organization, the Staples Foundation both provided the prize and surveyed all the Torch Club members about their top environmental concerns (nationally, the kids were concerned with global warming and pollution; locally recycling topped the list- smart kids!).

The official winner will be announced on Friday, so I’ll update this post then. In no particular order, here are the five top entries (hundreds of kids participated); the Torch Club members were asked to come up with creative ways to improve their local environment. Warning: I cried several times reading through the long descriptions of the project while voting (I was on an Amtrak from Boston to NYC- quite embarassing), but I couldn’t help it, these kids are INSPIRING!

Torch Club Name/Location: Boys & Girls Clubs of Greater Kalamazoo Torch Club; Kalamazoo, MI
Project Name: Clean Kids/Fresh Air Initiative
Recognizing laundry detergent as one of the greatest needs for community families, Torch Club members decided to make their own laundry detergent and bottle it using recycled containers. Several recipes were researched and tested and the final version cost $.38/gallon, well under the price of the majority of brand names. The profits made from detergent sales will be used to care for a fruit orchard and pine tree farm.

This is just extremely practical, and so smart in these economic times. And those huge plastic laundry containers are so wasteful! Hopefully these kids learned what a scam a lot of the stuff (especially toxic cleaning products) are; expensive and unhealthy! 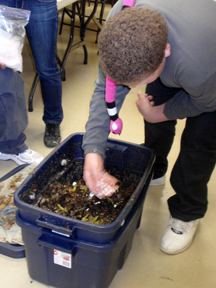 I love seeing kids put their hands in compost! Get messy! Play with worms! Yeah!

Torch Club Name/Location: Boys & Girls Clubs of Emerald Valley Torch Club; Eugene, OR
Project Name: The Miracle of Worms, Lessons through Vermiculture
This project allowed Torch Club members to use what they learned through previous national projects and take recycling to the next level. They introduced composting to the Club and introduced vermiculture (composting with worms) to its members. The Torch Club was responsible for the constant care of the worms and used worm debris as a nutrient-rich fertilizer for dirt used for plants, flowers, fruit trees and garden vegetables. Selling this enriched dirt demonstrated how Torch Club members are recycling to sustain their community’s environment.

I just love the idea of kids learning about vermiculture! I grew up playing with worms- every kid should have the pleasure of their slippery wriggliness, and watching them make rich earth from compost is a great lesson that nothing is wasted in nature.

Torch Club Name/Location: The Boys & Girls Clubs of Metro Denver Torch Club; Denver, CO
Project Name: Recycling Program
The Boys & Girls Clubs of Metro Denver created a project that demonstrated the importance and impact a recycling program could have both within their club and throughout the Denver community. Torch Club members created flyers with information on what types of materials could be recycled and where fellow members could easily find recycling bins. They also posted statistics about pollution and trash build-up and their negative effect on the environment. In an effort to reduce the amount of trash in their community, Torch Club members designated different parts of their neighborhood each week to receive a trash pick-up.

The part I liked best about this one is that the kids talked to lots of folks in their community (including other kids!) about why recycling really matters. That takes guts! 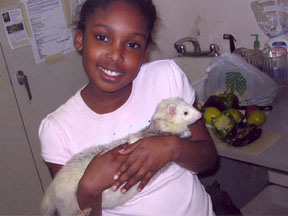 Torch Club Name/Location: The Caring People Alliance in Philadelphia, an affiliate of Boys & Girls Clubs of America; Philadelphia, PA
Project Name: “The Caring Garden Project”
The Caring People Alliance Torch Club is being recognized for their “Caring Garden” project, which involved growing a vegetation garden to demonstrate how the earth can be used to produce products that benefit others. With the help of their local community, Torch Club members designed and created raised garden beds that produced an assortment of vegetables that were fed to animals in the Club’s Caring Paws Program, which teaches kids about treating and caring for small animals.

The full description of this one made me cry on the Amtrak (in public) when I was reading through the judging materials. This urban group not only made a beautiful community garden, but then they fed themselves AND rescued animals with it! Sniff! 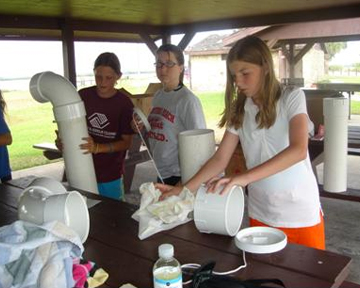 Torch Club Name/Location: Edgewater Boys & Girls Club of Volusia/Flagler Counties;
Edgewater, FL
Project Name: “Monofilament Recovery and Recycling”
The “Monofilament Recovery and Recycling” project included researching the dangers of monofilament (a thin string made from a single fiber used for fishing) to humans, birds, and other animals. In response to their findings, the Club developed a recycling program, which consisted of creating monofilament collection bins and distributed them throughout the community, in particular to fishermen in the area, for an easy way to dispose recycled items. The project successfully raised awareness around the danger of monofilament and will result in long-term benefits to wildlife and their community for years to come.

So thoughtful and region-specific! A great idea that will save animals far into the future (birds and other animals eat monofiliment (fishing wire), or it strangles them. 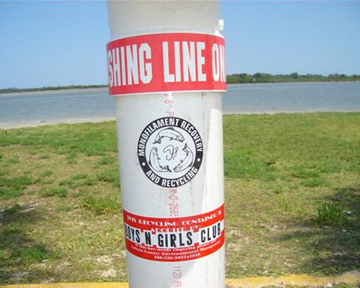 The Site Was Down….

Dress it Up! Summer Blooms with the Covet Eco Fashion Giveaway!