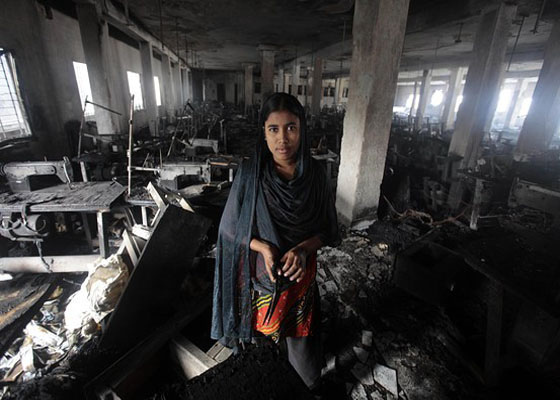 Seven workers were killed — all women — and more than 15 injured on Saturday following a fire in a garment factory in Mohammadpur in the western part of Dhaka City, Bangladesh. The Institute for Global Labour and Human Rights reports that the workers were crushed as they tried to escape the burning floor, which is located on the second story of the building. Two of the women killed were teenagers, aged 15 and 16, according to the group.

“After more than two decades of the apparel industry knowing about the risks to these workers, nothing substantial has changed,” said Judy Gearhart, executive director of the International Labor Rights Forum, in a statement.

The incident comes only two months after the Tazreen factory fire, which killed 112 employees in Bangladesh. Bangladesh happens to be the second largest exporter of clothing to the United States behind China.

According to the New York Times:

On Sunday, labels from several French brands, including Sol’s, Scott and Fox and G Blog by Gemo could be seen in the burned second-floor Smart Export Garments factory. Two other labels manufactured for Inditex, the world’s largest fashion group, were also visible — Leftie’s and Bershka. Labor activists found labels for the German low-cost brand KIK and a purchase order by a New York firm, M. Hidary & Company, for Hawaiian Authentics swimwear.

Eco-Chick shared this video about toxic tanneries in Bangladesh back in October.

Related: Why Eco-Fashion Matters: Toxic Tanneries to Get You Those Supercheap Shoes, Bags and Belts (Totally NOT Worth It!)

An Offer You Can't Refuse from Vegan Boutique Compassion Couture