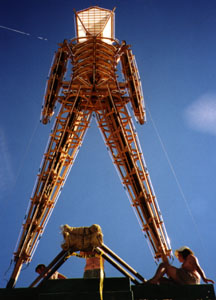 I have made art projects that have ended up at Burning Man, my friends have all (seemingly) gone to Burning Man, and I was supposed to go to the art and music desert festival this year, but life (in the form of being accepted to grad school unexpectedly) intervened. Since the festival ended yesterday, there’s no better time to talk about the afterparty, I mean cleanup.

While I’d heard from friends who have attended that Burning Man is supposed to be quite environmentally ethical, cleaning up after itself and whatnot (they have a whole arm–pun intended!– of the organization that’s dedicated to being environmentally friendly, called Greening Man) they have now gone a step further.  From the San Francisco Chronicle:

With the Burning Man art festival in the Nevada desert starting Monday, a group of San Francisco scientists is busy calculating how much the event contributes to global warming.

Encouraged by the resurgence of the green movement, the scientists are taking a hard look at all those sacred flaming temples, gas-powered scooters shaped like cupcakes, and hundreds of rumbling RVs that converge for a week on the dry Black Rock Desert lakebed.

With an idea that would make Al Gore smile, the scientists have created Cooling Man, an online calculator that determines how many tons of greenhouse gases each of the 37,000 “burners” will produce with their art projects and community camps.

For the first time, Burning Man participants will be able to “offset” their global warming impact much the same way large corporations do, by investing in clean energy projects.

Check out the Cooling Man site for more information. There, Burning Man’s participants can calculate and offset their carbon emissions. This is the first year they’re doing this, and so far, they’ve been able to offset the Burning of the Man (now to work on the massive amounts of carbon emitted by all those travelling to the show).

The Week in Green